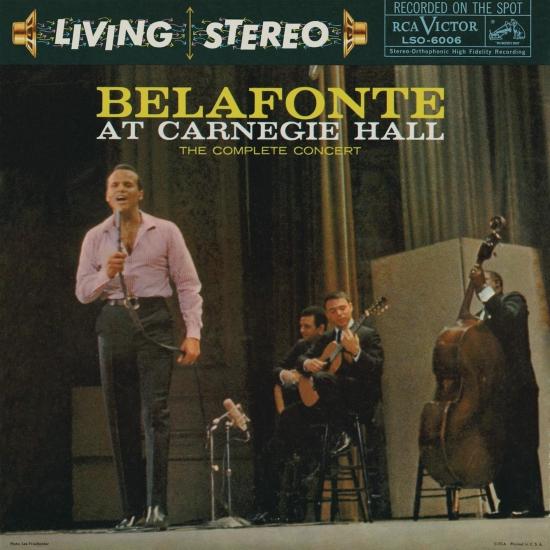 Info for Belafonte: At Carnegie Hall

„The granddaddy of all live albums, this double-album set captured the excitement of a Harry Belafonte concert at the height of his popularity. Sampled from two consecutive performances of identical material, Belafonte at Carnegie Hall was an anomaly at a time when only comedy albums were recorded outside of the studio environment. It wasn't the first live album ever made, but it was certainly the first to be a major financial and artistic success. It stayed on the best-selling album charts for over three years and remained in print until RCA discontinued pressing LPs. From the opening trumpet fanfare and brief orchestral overture to the epic 12-minute version of 'Matilda' (which set a standard for audience participation), the album never lets up. It is exciting, poignant, thrilling, intimate, and at times, spontaneously hilarious. Belafonte's mastery in front of an audience was never better displayed than here, a mastery that resulted in him becoming one of the most popular concert draws in history. Producer Bob Bollard and orchestra leader Bob Corman deftly integrated the 47-piece orchestra into the performance but knew when to lie back to let Belafonte sing, accompanied by a small combo of two guitars, bass, and percussion. The concert is divided in three sections: 'Moods of the American Negro,' 'In the Caribbean,' and 'Around the World.' All the hits are here: 'Day O,' 'Jamaica Farewell,' 'Mama Look a Boo Boo,' and others, plus calypso, folk songs, chain gang songs, spirituals, and songs from other lands, representing a veritable best-of package of his first decade with RCA Victor. For sheer scope and genius of performance, this is the quintessential Belafonte package.“ (Cary Ginell, AMG)
Harry Belafonte, vocals
Recorded April 19, 1959 and Wiltwyck Scholl, April 20, 1959 Benefit Performances for The New Lincoln School
Produced by Bob Bollard
Digitally remastered