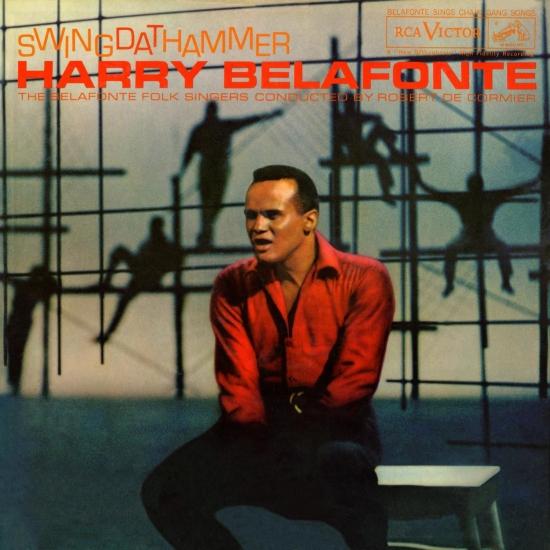 „An album focusing on music of chain gangs, this record is as explosive and powerful as any in Belafonte's catalog. Accompanied again by the Belafonte Folk Singers and the occasional guitar and bass (with conductor Bob Corman credited under his real name, Robert De Cormier), Belafonte turns the hypnotic, rhythmic chants of Negro prisoners into riveting, passionate songs of unrelenting loneliness and shame ('Swing Dat Hammer'), torturous days laboring in the hot sun ('Go Down Old Hannah'), hatred for their captors ('Grizzly Bear') and even their guard dogs ('Here Rattler Here'). 'Diamond Joe' features Belafonte expressing the prisoner's anger and despair as he faces an endless life on the rock pile. It is one of the most chilling performances of his career.
The finale is an atomospheric piece called 'Talkin' an' Signifyin'' consisting of Belafonte telling stories and joking with other 'prisoners' (members of the Folk Singers) as they lie in their bunkhouse after dark, with rain pelting down on the roof. The material was drawn from research of actual recordings and written fragments from prison life. Folklorists and purists who have decried Belafonte for 'commercializing' folk music need look no further than this album to discover that Belafonte's translation of the traditional material into more commercial terms only intensifies the impact of the music. This is Belafonte at his best.“ (Cary Ginell, AMG)
Harry Belafonte, vocals The Belafonte Folk Singers, vocals Millard Thomas, guitar Robert De Cormier, conductor
Recorded June 3-6, 1961 at Webster Hall, New York, New York
Engineered by Robert Simpson
Produced by Bob Bollard
Digitally remastered