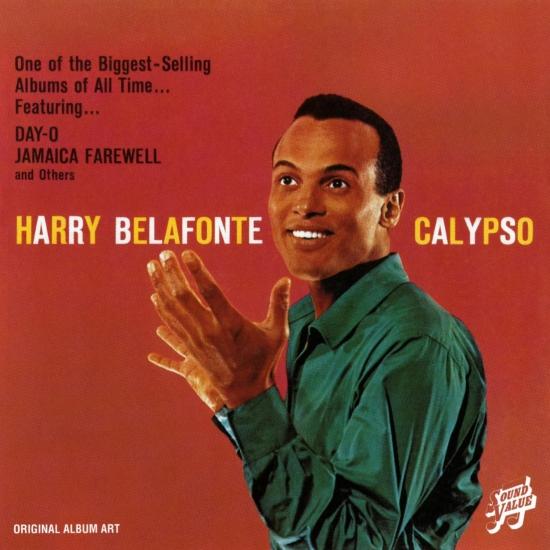 Harry Belafonte is a superstar known throughout the world for making 'calypso' mainstream. When you think of Belafonte's greatest hits you think of 'Calypso.' Released in 1956 as Belafonte's second album, 'Calypso' changed conventional music forever. The album features the classics, 'Day-O (The Banana Boat Song),' 'Jamaica Farewell,' 'Hosanna,' 'Man Smart (Woman Smarter)' and many more. 'Calypso' is one of the first albums to sell over a million copies.
„This is the album that made Harry Belafonte's career. Up to this point, calypso had only been a part of Belafonte's focus in his recordings of folk music styles. But with this landmark album, calypso not only became tattooed to Belafonte permanently; it had a revolutionary effect on folk music in the 1950s and '60s. The album consists of songs from Trinidad, mostly written by West Indian songwriter Irving Burgie (aka Lord Burgess). Burgie's two most successful songs are included -- 'Day O' and 'Jamaica Farewell' (which were both hit singles for Belafonte) -- as are the evocative ballads 'I Do Adore Her' and 'Come Back Liza' and what could be the first feminist folk song, 'Man Smart (Woman Smarter).' Calypso became the first million-selling album by a single artist, spending an incredible 31 weeks at the top of the Billboard album charts, remaining on the charts for 99 weeks. It triggered a veritable tidal wave of imitators, parodists, and artists wishing to capitalize on its success. Years later, it remains a record of inestimable influence, inspiring many folksingers and groups to perform, most notably the Kingston Trio, which was named for the Jamaican capital. For a decade, just about every folksinger and folk group featured in their repertoire at least one song that was of West Indian origin or one that had a calypso beat. They all can be attributed to this one remarkable album. Despite the success of Calypso, Belafonte refused to be typecast. Resisting the impulse to record an immediate follow-up album, Belafonte instead spaced his calypso albums apart, releasing them at five-year intervals in 1961, 1966, and 1971.“ (Cary Ginell, AMG)
Harry Belafonte, vocals
Millard J. Thomas, guitar (on tracks 1, 4, 6, 7)
Frantz Casseus, guitar
Tony Scott Orchestra (on tracks 2, 3, 5, 8, 9, 10, 11)
Tony Scott, conductor
The Norman Luboff Choir (on tracks 8, 9, 10)
Recorded August 18, October 20, November 9, 1955 at Webster Hall, New York City
Produced by Ed Welker, Herman Diaz Jr., Henri René
Digitally remastered