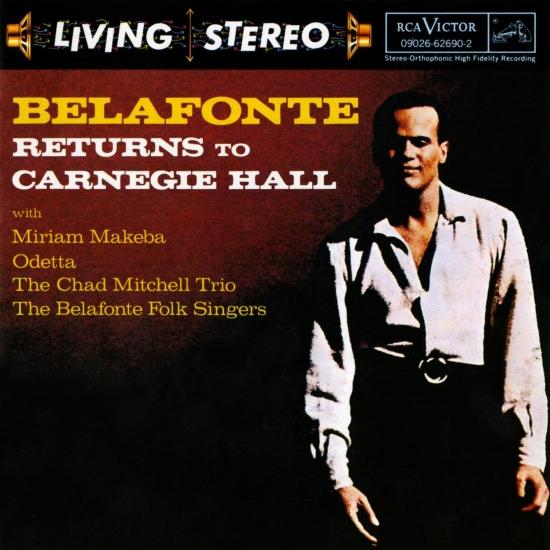 1959 saw the release of Harry Belafonte's landmark concert recording at Carnegie Hall, one of the most artistically and commercially successful live albums ever. Belafonte returned to Carnegie Hall in 1960, and released a second live album in much the same mold as the first. Surprisingly--or perhaps not so surprisingly given Belafonte's endless talent and charisma—„Belafonte Returns to Carnegie Hall Live“ is almost as wonderful as its predecessor.
Naturally, Belafonte is in superb voice, and his spare, nuanced performances are breathtaking (see his tender reading of 'Suzanne'). But the real treat of „Returns to Carnegie Hall“ is the presence of several guest stars, handpicked by Belafonte. These include South African singer Miriam Makeba, coffeehouse folk outfit the Chad Mitchell Trio, and folk singer Odetta, whose 'I've Been Driving on Bald Mountain' is one of the disc's highlights.
Harry Belafonte, vocals
The Belafonte Folk Singers, vocals
Chad Mitchell Trio, vocals
Odetta, vocals
Miriam Makeba, vocals
Danny Barrajanos, bongos, conga
Ernie Calabria, guitar
Walter Raim, guitar
Millard Thomas, guitar
Robert De Cormier, conductor
Milton Okun, conductor
Recorded May 2, 1960 live at Carnegie Hall, New York
Engineered by Bob Simpson
Produced by Bob Bollard
Digitally remastered