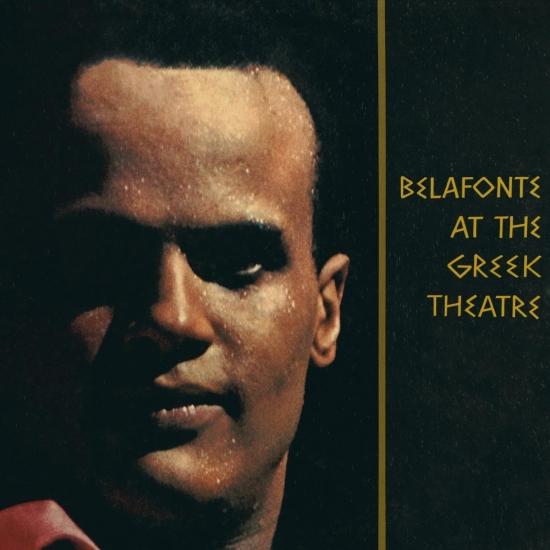 Info for Belafonte at the Greek Theatre

„By 1963, Harry Belafonte's live act had taken on the proportions of a theatrical event, tightly choregraphed and rehearsed with elaborate production numbers. For a solid month during the summer of 1963, the act sold out Los Angeles' Greek Theatre, an open-air amphitheatre nestled in the Hollywood Hills. Fans who couldn't get in would climb trees surrounding the theatre to get a glimpse of the show (Belafonte may have coined the phrase "nosebleed section"). This live, double album, Belafonte's third, was edited from performances recorded during that month, and despite a nagging echo, captures the excitement of the concerts, which helped make the Greek world renowned. Belafonte's keen sense of humor ("Excuse me, miss, do you really need binoculars from there?") and rapport with his audience are in evidence here, especially in the epic sing-along of the moment, "Zombie Jamboree," from The Many Moods of Belafonte, which takes up an entire side and nearly seventeen minutes. Very few of the songs are retreads ("Look Over Yonder" and "Try to Remember" are the only songs presented that Belafonte had recorded in the studio). A surprise inclusion is "Merry Minuet," written by Sheldon Harnick (Fiddler on the Roof), a song Belafonte had sung a decade earlier in his Broadway debut, John Murray Anderson's Almanac, but had never committed to record. This album marks the end of Belafonte's most artistically productive period on record. Other excellent albums followed Greek Theatre, but not with the consistency of those from 1959-63.“ (Cary Ginell, AMG)
Harry Belafonte, vocals
William Eaton, clavietta
Ernie Calabria, guitar
Jay Berliner, guitar
John Cartwright, bass
Percy Brice, drums
Ralph MacDonald, percussion
Recorded August 1963 at The Greek Theatre, Los Angeles, CA
Engineered by Bob Simpson
Produced by Bob Bollard
Digitally remastered
Please Note: We offer this album in its native sampling rate of 44.1 kHz, 24-bit. The provided 96 kHz version was up-sampled and offers no audible value!