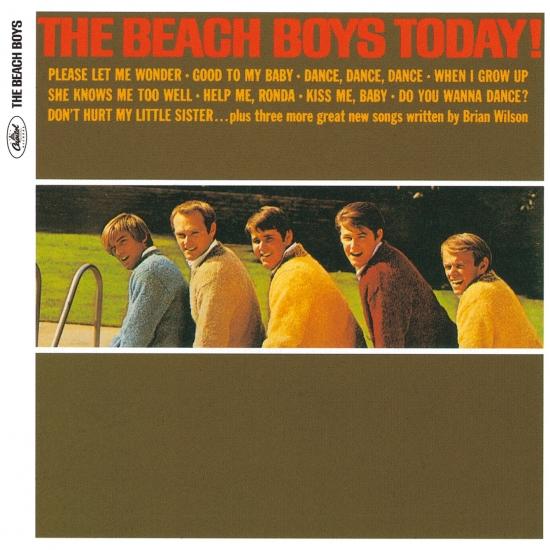 Although other Beach Boys albums have received greater critical acclaim, „The Beach Boys Today!“ is almost unbeatable for its content of two-minute quality songs that are unpretentious and infectious. Their rock & roll roots are revisited with 'Do You Wanna Dance.' 'Dance, Dance, Dance' and 'Good To My Baby' are two underrated Brian Wilson songs and he compliments them with more of his gorgeous ballads in 'She Knows Me Too Well' and 'Please Let Me Wonder.' The seeds of „Pet Sounds“ were sown with this impressive record.
„This single-disc bootleg compiles pseudo-stereo mixes of the Beach Boys Today! and Summer Days (And Summer Nights)!! albums, as well as ten additional bonus tracks. These recordings are not true stereo versions, but rather crudely mixed copies of the unbalanced master. Although the remixes would be ideal, Beach Boys enthusiasts will undoubtedly find plenty to enjoy, and the flawless sonics likewise make it a pleasure to listen to. Both Beach Boys Today! and Summer Days (And Summer Nights)!! are considered vital precursors to Brian Wilson's pop magnum opus, Pet Sounds. Indeed the groundwork for that album is unmistakably heard on tracks such as 'Please Let Me Wonder,' 'Kiss Me Baby,' 'She Knows Me Too Well,' 'Girl Don't Tell Me,' and 'Let Him Run Wild.' By presenting these tracks in a faux stereo, enthusiasts are able to sonically pick apart Wilson's complex musical arrangements and even more Byzantine vocal harmonies. Unlike the Unsurpassed Masters series -- from which these tracks were gleaned -- there are no multiple takes presented here. However a few 'track' (read: instrumental) versions are included. Of particular note is the non-Beach Boys 'Guess I'm Dumb,' which Wilson wrote and produced for Glen Campbell. Perhaps foreshadowing the difficulties that Smile would present a few years later, 'Three Blind Mice' is a stunningly orchestrated instrumental about which little is known, other than it was recorded during a session that Brian Wilson produced for Dick Reynolds. Clocking in at less than a minute, this is a perfect example of how Brian Wilson was tormented by creating beautiful pop music and having no logistical outlet for it. Luckily, at least some of it was documented. This release is the final entry in the Sea of Tunes bootleg catalog. Although conjecture remains as to whether more titles from the label were in the pipeline, changes within the copyright laws effectively shut down many Singapore-based labels.“ (Lindsay Planer, AMG)
Al Jardine, lead, harmony and backing vocals, rhythm guitar, bass, handclaps
Mike Love, lead, harmony and backing vocals, handclaps
Brian Wilson, lead, harmony and backing vocals, four and six-string bass guitar, grand, upright and tack piano, baldwin harpsichord, hammond organ, handclaps
Carl Wilson, harmony and backing vocals, lead, rhythm and twelve-string guitar, six-string bass guitar, handclaps
Dennis Wilson, lead, harmony and backing vocals, drums, tambourine, handclaps
Recorded June 22, 1964–January 19, 1965 at United Western Recorders, Gold Star Studios, and RCA Victor Studios, Hollywood
Produced by Brian Wilson
Digitally remastered