Live In London The Beach Boys 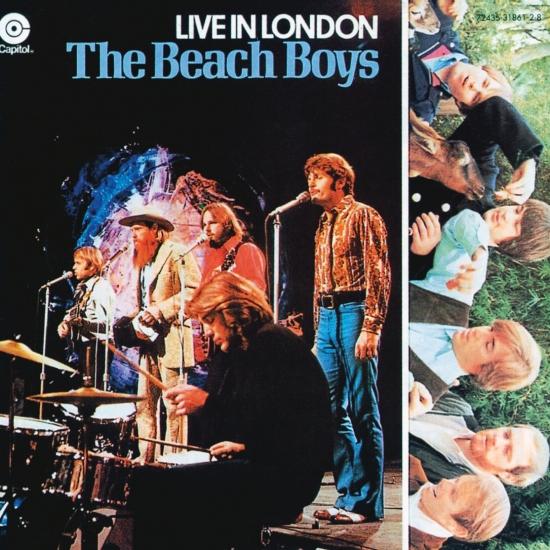 Info for Live In London

Almost from the very moment the Beach Boys hit the top ten, fans across the country couldn’t wait to hear if the group could duplicate those terrific harmonies in person. It’s on this album…which features concerts from two disparate times in their career…that you’ll hear that the Beach Boys were not just terrific studio singers. Onstage, they could also create sounds that would make you feel like you were on the beach in California, that “Surf City” fantasy being one of the true primal attractions of the group’s music from the very beginning.
In December 1961, after “Surfin’” had hit the local airwaves, the Beach Boys played brief sets at a few hops and shows, notably their first paid gig on New Year’s Eve at the Long Beach Municipal Auditorium. Mike Love recalls that night. “We got three hundred dollars to play [three songs at] a Richie Valens memorial dance. I can still remember it because we got paid for something besides working, which was really a trip. We got paid for playing music.”
1962 was the year the Beach Boys cut their teeth as rock ‘n’ rollers with regular performances at local L.A. teen clubs like the Rainbow Gardens. They were often hired by concert promoter, disc-jockey and game show host Bob Eubanks to play several half-hour sets a night at his Cinnamon Cinder club. These dates weren’t very lucrative, according to Eubanks. “I used to pay them about a hundred dollars a night, twenty dollars a man. We always did capacity when the Beach Boys played.” Capacity, however, meant about four hundred people.
For many of their early dates in Southern California (what manager Murry Wilson called “the forty freebies”), the Beach Boys didn’t get paid at all; their reward came when the local DJs, who hosted the record hops, would play the group’s records on the radio, thereby increasing sales. Other promotional gigs might find the Beach Boys performing a few songs at a local record store, to increase customer traffic and encourage the retailer to stock larger quantities of their records. Everything was designed to increase airplay, back then the only way to have hit records. (From the liner notes)
„Though their studio output is the stuff of legend, the Beach Boys' live performances aren't as familiar to the casual fan. Live in London (also released as Beach Boys '69) represented the second live set from the band, after 1964's teen-scream Beach Boys Concert. By the turn of the 1960s into the '70s, the group was finally rising to the task of translating its lush, layered sound into a live arena. Classics like 'Wouldn't It Be Nice' and 'Darlin'' carry all of their original beauty, bolstered by the energy of the live setting and by swinging horn accompaniment. More unexpected cuts, such as the celebratory 'Wake the World' and a bluesy take of 'Bluebirds Over the Mountains,' fit in perfectly with staples like the tempo-shifting, musically precise version of 'Good Vibrations,' just one crowd-pleaser among many on Live in London.“ (AMG)