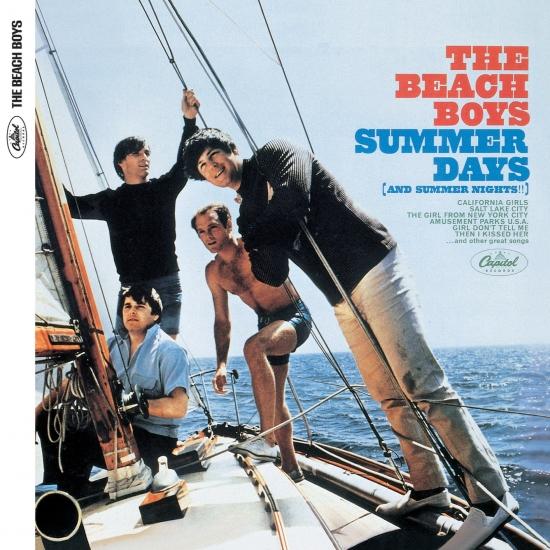 Summer Days (And Summer Nights!!) is the ninth studio album by American rock band The Beach Boys, released on July 5, 1965. Today is the 50th anniversary of Summer Days (and Summer Nights!), released the day after USA independence day and featuring only the Wilson brothers and Mike Love on the cover -Al apparently had the ‘flu. Summer Days can be seen as the Beach Boys classic “pop” album. While today was noted for its innovative use of the studio and “confessional” lyrics, Summer Days can be seen as a more up-tempo effort that is best known for the two massive hits, Help Me Rhonda and California Girls. Although much of the first part of the album is fairly lightweight and pop-oriented, this section does include the excellent Beatles pastiche Girls Don’t Tell Me..
The second part of the album does include two further milestones on the route to Pet Sounds, the lush instrumental Summer Means New Love and the ornate and lyrically deep Let Him Run Wild. And Your Dream Comes True is also a beautiful a-capella closer that captures the magic of summer and the mid-60s Beach Boys. If it is a bit of a holding operation- remember we are only two records away from Pet Sounds, it still shows Brian and the Beach Boys as masters of the pop scene .
„Summer Days (And Summer Nights!!) was a bit of a regression from the success of Today!, lapsing back into that distressing division between first-rate cuts and lightweight also-rans that characterized their pre-1965 albums. The difference is that the very best tracks were operating on a more sophisticated level than the 1962-1964 classics. 'Help Me, Rhonda' was a number one single and would be their last Top 40 exercise in sheer fun for a while. More impressive was 'California Girls,' with its symphonic arrangement, glorious harmonies, and archetypal statement of Californian lifestyle. On the other hand, subpar efforts like 'Amusement Park U.S.A.' and 'Salt Lake City,' throwbacks to the empty-headed summer filler of previous days, will necessitate that the CD remote button remains close at hand. The answer song 'The Girl From New York City' and the cover 'Then I Kissed Her' are well done but don't break new ground. Yet a couple of cuts are among their most essential LP-only efforts. 'Let Him Run Wild' is a soulful ballad with a great Brian Wilson falsetto vocal. 'Girl Don't Tell Me,' with its gorgeous melody, fine lead vocal debut from Carl Wilson, and subtle depiction of romantic rejection and disappointment, may be the best obscure pre-Pet Sounds Beach Boys track.“ (Richie Unterberger, AMG)
Al Jardine, vocals, electric rhythm guitar
Bruce Johnston, vocals, acoustic grand piano, hammond organ, celeste
Mike Love, vocals
Brian Wilson, vocals, bass, acoustic upright piano, hammond organ, timpani
Carl Wilson, vocals, guitars
Dennis Wilson, vocals, drums, tambourine
Recorded February 24, March 4–20, June 4, 1965 at United Western Recorders, Gold Star Studios, and CBS Columbia Square, Hollywood
Produced by Brian Wilson
Digitally remastered