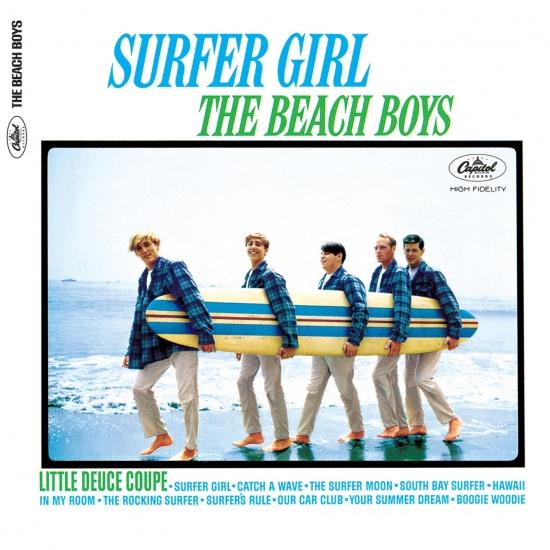 The Beach Boys' third album, „Surfer Girl“ finds Brian Wilson & Company hitting their stride, mastering the craft of beautiful musical arrangement within a straightforward pop format. The album is best known for its title track, a luscious pop gem that features the bands trademark harmonies in one of their richest and most evocative settings--the song's simple, surf-related lyric belies its unbelievably lush vocal composition. It's not the album's only classic, however--'Little Deuce Coupe' hits the other end of the Beach Boys' spectrum, with its easy-going groove and boastful lyrics.
The proceedings quickly dip back into the melancholy--'In My Room' is a seamless work of introspection, a template for bedsitter pop. 'Hawaii' is a faster shuffle whose playful melody explores the impressive upper register of the Boys' prodigious vocal gifts, woven, as always, around equally tight instrumental backing. Rounded out by the rollicking instrumental 'Boogie Woodie,' the richly varied and expertly constructed „Surfer Girl“ catches the Beach Boys making pop history, and having a ball while they're at it.
„Capitol pushed the Beach Boys for too much material in too short a time for the group to maintain as much quality control as would have been desirable. Consequently, most of their pre-1965 albums contain a high degree of filler, and thus stack up poorly next to those of such contemporaries as the Beatles, who were able to maintain high standards on almost all of their tracks. Surfer Girl does have some great tunes, including the title song, the hot rod ditty 'Little Deuce Coupe,' and 'Catch a Wave' (which could have been a substantial hit single on its own merits). Most significant of all is the gorgeous ballad 'In My Room,' which anticipated future Beach Boys releases both in its sophisticated production (strings, organ, dense harmonies) and its personal, solipsistic lyrics. The rest is surprisingly mediocre filler, especially as at this point they were restricting their lyrical themes to beach culture almost exclusively; 'Your Summer Dream,' with its unusual harmonies, is about the most interesting of the obscure tracks. If you're not a dedicated Beach Boys fan, though, you should pass, as you can find the first-rate tracks on best-of anthologies.“ (Richie Unterberger, AMG)
Al Jardine, backing vocals, harmony vocals, bass
Mike Love, lead vocals, backing and harmony vocals
David Marks, rhythm guitar, hand claps
Brian Wilson, lead vocals, backing and harmony vocals, bass, piano, organ
Carl Wilson, backing and harmony vocals, lead guitar, bass
Dennis Wilson, lead vocals, backing and harmony vocals, drums
Additional musicians:
Hal Blaine, drums, percussion
Steve Douglas, tenor saxophone
Maureen Love, harp
Recorded May 9, June 12; July 16 – unknown July dates 1963
Produced by Brian Wilson
Digitally remastered