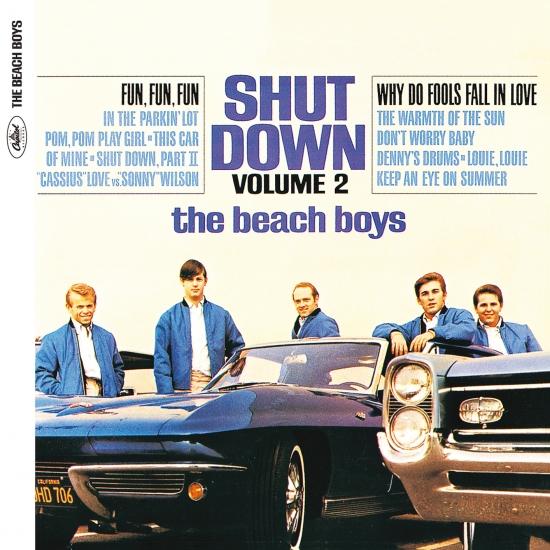 „Another erratic early album from the Beach Boys; few other rock LPs have such a wide gap between the best and worst material. On the good side, you have absolute classics in the Chuck Berry-ish 'Fun, Fun, Fun' and the superb 'Don't Worry Baby,' one of the most advanced pop productions of 1964 with its breathtaking harmonies and unusual lyric. 'The Warmth of the Sun' is one of the most melodic (and melancholic) ballads they ever recorded, and 'Why Do Fools Fall in Love' is one of their best oldies covers. Yet the rest reduces the oceanic scale of the classics to dishwater, whether they're throwaway hot rod tunes and instrumentals, innocuous high-school romantic ditties, or a soulless cover of 'Louie Louie.' When this album hit the racks in early 1964, the Beatles were proving that you could make LPs that were all killer, no filler; the Beach Boys would soon be forced to up their ante.“ (Richie Unterberger, AMG)
The stereo editions of Surfin' USA, Surfer Girl, Little Deuce Coupe, Shut Down Vol. 2, All Summer Long, Beach Boys Christmas Album and Beach Boys Concert were all mixed in stereo by their own preferred engineer, Chuck Britz, ostensibly under the group's supervision.
'Brian may or may not have been present for those mixing sessions — evidence suggests that he trusted Chuck's skills enough to let him prepare those mixes on his own — but the group held onto their multitrack tapes and delivered stereo masters to Capitol, rather than allowing Capitol to prepare their own stereo versions. Later, when Brian was only delivering mono masters, Capitol would prepare the Duophonic pseudo stereo editions for the stereo market,' says Alan Boyd, producer and Beach Boys' archivist.
All of the newer stereo mixes on these remastered albums (The Beach Boys Today!, Summer Days (And Summer Nights!!), The Beach Boys' Party, Pet Sounds and Smiley Smile) were done by Mark Linett on behalf of the Beach Boys.
Al Jardine, harmony and backing vocals, bass, rhythm guitar
Mike Love, lead, harmony and backing vocals
Brian Wilson, lead, harmony and backing vocals, bass, piano
Carl Wilson, lead, harmony and backing vocals, lead guitar
Dennis Wilson, lead, harmony and backing vocals, drums
Recorded January 1–10, February 19–20, 1964 at United Western Recorders and Gold Star Studios, Hollywood
Produced by Brian Wilson
Digitally remastered