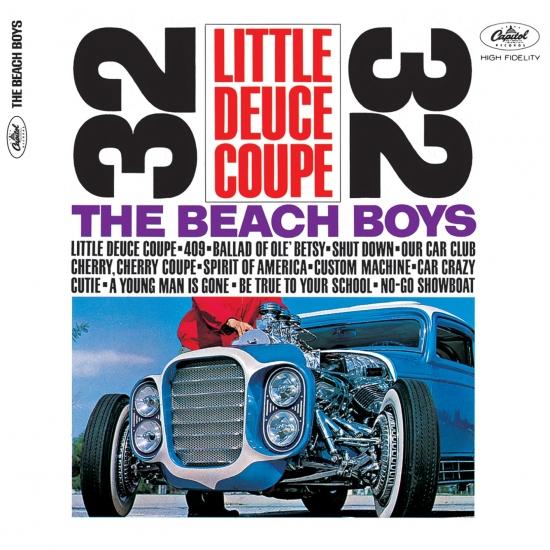 The Beach Boys' „Little Deuce Coupe“ is arguably the first rock & roll concept album. Combining car songs from their previous three albums with several new car-related numbers, this album celebrates the simple joys of being a teenage automobile owner. Despite the inherent limitations of the car concept, this album suggested that there might be more to the clean-cut Californian quartet than Chuck Berry-inspired rave-ups about driving and surfing.
The hit singles 'Little Deuce Coupe' and 'Be True To Your School' showed that leader Brian Wilson was becoming a remarkably sophisticated producer, songwriter and arranger. While Wilson was not yet a profound lyricist, he had mastered the art of vocal arrangements, as shown by the spectacular five-part harmonies on 'Spirit of America' and 'A Young Man Is Gone,' their touching tribute to James Dean. Although it would be a few years before The Beach Boys truly hit their stride, „Little Deuce Coupe“ is a fun, unpretentious album and a wonderful evocation of a California summer circa 1964.
„Little Deuce Coupe was a concept album of sorts, in that most of the songs had something to do with cars and hot rod culture. That's a pretty thin train of thought to sustain for most of a record. What's worse, by the Beach Boys' own standards of hot rod tunes, most of the tracks are pretty trite and unimaginative, rating among their worst early material. Not only that, the three best cuts -- 'Little Deuce Coupe,' '409,' and 'Shut Down' -- had already been issued on LP. The most noteworthy of the other tracks was the Top Ten hit 'Be True to Your School,' whose fine tune and arrangement are marred by sappy lyrics of faith and loyalty to one's high school. (The album version, oddly, is different from the superior single, which had the Honeys adding female cheerleader chants.) 'Spirit of America' and 'A Young Man Is Gone' (a James Dean tribute with Four Freshmen-style vocals) are moderately interesting numbers, but on the whole this is probably the worst early Beach Boys album, with the possible exception of Surfin' Safari (and their 1964 Christmas LP, which doesn't really count).“ (Richie Unterberger, AMG)
Al Jardine, harmony and backing vocals, bass
Mike Love, lead vocals, harmony and backing vocals, saxophone
David Marks, harmony and backing vocals, rhythm guitar
Brian Wilson, lead vocals, harmony and backing vocals, bass
Carl Wilson, harmony and backing vocals, lead guitar
Dennis Wilson, harmony and backing vocals, drums
Recorded April 19, 1962, January 5, July 12 & 16, September 2, 1963, United Western Recorders, Hollywood
Produced by Brian Wilson
Digitally remastered