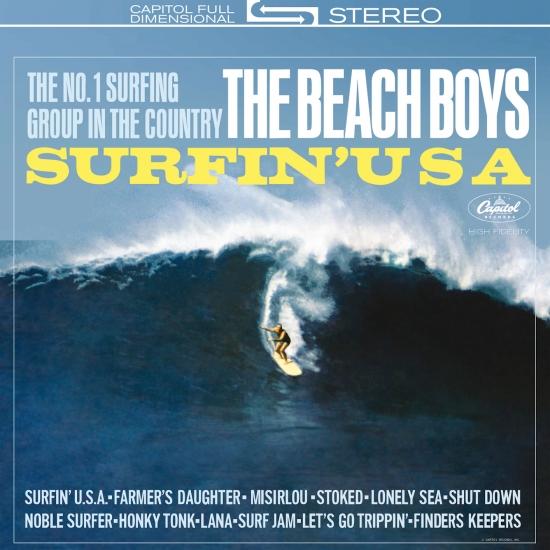 „The real breakthrough, as Brian Wilson asserts himself in the studio as both songwriter and arranger on a set of material that was much stronger than Surfin' Safari. Besides the hit title track and its popular drag-racing flip side ('Shut Down'), this has a lovely, heartbreaking ballad ('Lonely Sea') and a couple of strong Brian Wilson originals ('The Noble Surfer' and 'Farmer's Daughter'). There are also a surprisingly high quotient of instrumentals (five) that demonstrate that, before session musicians took over most of the parts, the Beach Boys could play respectably gutsy surf rock as a self-contained unit. Indeed, the album as a whole is the best they would make, prior to the late '60s, as a band that played most of their instruments, rather than as a vehicle for Brian Wilson's ideas. The LP was a huge hit, vital to launching surf music as a national craze, and one of the few truly strong records to be recorded by a self-contained American rock band prior to the British Invasion.“ (Richie Unterberger, AMG)
Brian Wilson, lead, harmony and backing vocals, bass, keyboard, celeste, glockenspiel
Mike Love, lead, harmony and backing vocals, saxophone
David Marks, rhythm guitar
Carl Wilson, harmony and backing vocals, lead guitar
Dennis Wilson, harmony and backing vocals, drums
Recorded June 13, 1962 and January 5 – February 12 1963
Produced by Nick Venet
Digitally remastered

Please Note: We offer this album in its native sampling rate of 44.1 kHz, 24-bit. The provided 192 kHz version offers no audible value!