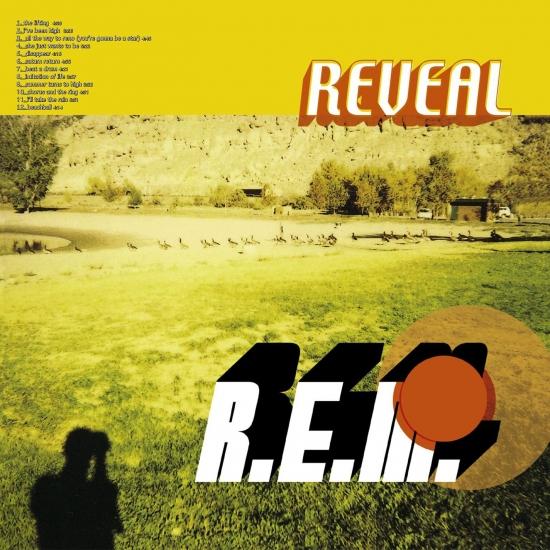 It's been twenty years since R.E.M. released their debut single, 'Radio Free Europe,' declaring their independence from the rock cliches of 1981 with a few self-evident truths: guitars, drums, hair, soulful moaning, spasmodic melody, raw emotion, pretensions and sexy mumbles nobody has deciphered to this day. Jesus, it sounded good. They were the archetypal American band of the Eighties, but it wasn't till the Nineties that they grew up and hit the roll of their lives: In a mere six years, they gave us four classics, in Out of Time (love vs. war), Automatic for the People (love vs. death), Monster (love = guitars) and New Adventures in Hi-Fi (guitars = sex). But the past few years have been rough on R.E.M. and their fans, especially with the departure of drummer Bill Berry. So it's inspiring to hear Michael Stipe, Peter Buck and Mike Mills brighten up on Reveal, telling a few fables of their own reconstruction with an album of gorgeous, woozily sun-struck ballads. Reveal won't need to grow on you - thirty seconds into the opener, 'The Lifting,' you can tell these guys got lucky with the muse again. Like U2's All That You Can't Leave Behind, it's a spiritual renewal rooted in a musical one.
The last we heard from R.E.M. was the 1998 transitional album Up, their first without Berry, a sour, parched affair that hasn't gained any luster with time. The one keeper was the Brian Wilson smile of 'At My Most Beautiful,' best heard on the Never Been Kissed soundtrack (a stronger album song for song than Up). But if you go back to Up after hearing Reveal, you get the idea that this is the album they were trying to make then, and that this time they got all the way there and found a parking spot. The Eno-style keyboard textures have more room to breathe amid the largely acoustic guitars, with the arcane sound effects intricately woven into the songs. After a few dozen spins, the only ones I'm sick of are 'Disappear' and 'Saturn Return,' for no good reason except, in the latter case, astrology filtered through Goldie and Gwen Stefani. The rest? Merely the R.E.M. of your dreams, all rambling guitars haunted by Stipe, who makes flesh and blood out of the lyrical riddles with his most effusive and emotional growls.
Reveal doesn't rock out much, which was never R.E.M.'s department anyway. Instead, they stick to the ruminative midtempo strum-groove where they feel at home, with guests Joey Waronker on drums, as well as the Posies' Ken Stringfellow and the Young Fresh Fellows' Scott McCaughey on keyboards. 'Imitation of Life' might be the most beautiful song these gentlemen have put their names on since 'Man on the Moon' back in 1992. Buck returns to the Rickenbacker-style guitar jangle of his early, hairy days, while the surging strings and playful keyboards raise goose bumps you didn't even remember you had. Like many of the highlights on Reveal, 'Imitation of Life' finds Stipe singing about the pleasures of love and their aftermath ('This sugar cane, this lemonade/This hurricane, I'm not afraid'). But whether he comes on terrified of love, in 'I've Been High,' or devastated by it, in 'I'll Take the Rain,' he talks about the passion with a different disguise in every song. He even gets ecstatic in 'Beat a Drum,' a pastoral sex reverie where he knocks the Birkenstocks with a mysterious lover who takes him 'halfway from coal, halfway to diamond' over an unironically blissful piano melody.
The songs on Reveal have lushly layered hooks that the band couldn't have pulled off ten years ago: the prairie-guitar twang of 'All the Way to Reno (You're Gonna Be a Star),' the melancholy Al Green horns of 'Beachball,' the Another Green World synth sparkles of 'I've Been High.' But the music never gets cluttered, thanks largely to Mr. Stipe, who comes out front to emote loud and clear. He sings in the voice of a full-grown mammal who's smart enough to realize that love is scary stuff and brave enough to hunger for it anyway, even though he's seen the end of the world as he knows it so many times it's not a joke anymore. It must be strange for R.E.M., as it is for the rest of us, that the rock world of 2001 looks so much like the one that they were rebelling against twenty years ago; once again, the radio is full of interchangeable metal gomers who never met a rule they didn't obey, and once again R.E.M. are totally out of step with the times. And judging by the ceaselessly astonishing beauty of Reveal, that's exactly where they want to be. (Rob Sheffield, Rolling Stone Magazine)
Peter Buck, guitars, mandolin
Mike Mills, bass, organ, piano, vocals
Michael Stipe, lead vocals
Additional Musicians:
Scott McCaughey
Ken Stringfellow
Joey Waronker
Jamie Candiloro
Produced by Pat McCarthy & R.E.M.
Recorded & Mixed by Pat McCarthy & Jamie Candiloro
Recorded at THE WAREHOUSE Studios, Vancouver, British Columbia and JOHN KEANE Studios, Athens, Georgia
Mastered by Bob Ludwig at Gateway Mastering Studios
REVEAL was nominated for the 2002 Grammy Award for Best Recording Package. 'Imitation Of Life' was nominated for the 2002 Grammy Award for Best Pop Performance By A Duo Or Group With Vocal.