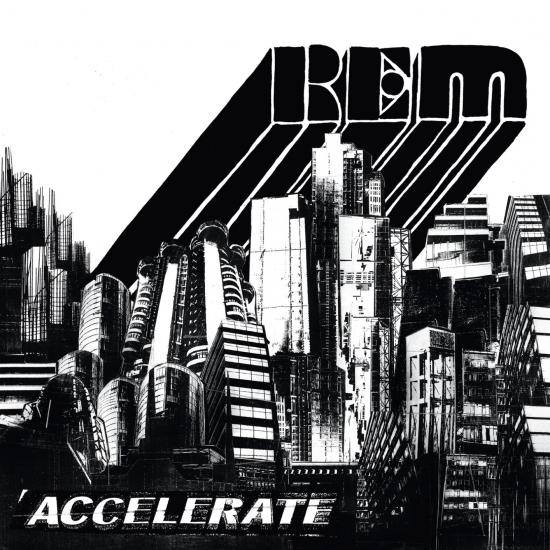 Accelerate, the first studio album in four years from R.E.M., finds modern rock's most acclaimed band returning to the stripped-down, guitar-driven power that first enraptured fans. Helmed by the band and, for the first time, Jacknife Lee puts the 2007 Rock and Roll Hall of Fame group once again firmly behind the wheel of alternative rock, a genre R.E.M. helped invent.
'5 1/2 Stars! They haven't made an album this consistent since Automatic For The People and haven't redlined so engagingly since Life's Rich Pageant.' (Spin)
'Buck's return to electric prominence is both striking and massively welcome.' (Uncut)
One of Guardian's 10 essential albums. '...it's a pleasure to have them back on form.' (Guardian)
„Welcome to REM's 'new direction', folks. It's the old one, thank goodness! Eleven years after Bill Berry's departure from the drum stool it's finally ok for the band to admit that things haven't been too rosy on the communications front. The decision to soldier on was, they say, brave but maybe misguided, especially when it led to the stylistic dilettantism of albums like Up or the frankly moribund Around The Sun. But those who thought that the hiring of Jacknife Lee as producer (Bloc Party, Editors) might lead to another radical re-think will be disappointed. For what REM have done (in a mere nine days) is return to their indie roots and made a fast 'n' dirty album that thrills by its very speed. An apt title, indeed!
The opening chords of opener, Living Well Is The Best Revenge lets you know. Back are the wailing backing vocals of Mike Mills, the chiming D chords and drones of Peter Buck and some of the most impassioned singing that Stipe has laid down in eons. In interviews the band revealed that they'd slashed anything that wasn't instantly appealing. The results are a spartan 35-minute romp through the things that made us love them way back in the mid-80s. Viz: the punk thrash of hilarious closer, I'm Gonna DJ, which comes on like a cousin to End Of The World As We Know It. In fact the only downside of Accelerate is the album's tendency to recall too many of the band's best earlier moments. The folk waltz of Houston could come from their classic Out Of Time mid-period. Man-Sized Wreath could be from Green, such is the infectiousness of its chorus. The title track is just classic REM in any era. Yet when you get to the middle of Sing For the Submarine you realise that 20 years ago they couldn't have taken a song and lifted it so monumentally by sheer force of dynamics. So there's still progress of sorts.
Stipe's lyrics are as politically sharp as ever, with the aforementioned Houston's lyrics dealing with Hurricane Katrina (''if the storm doesn't kill me the government will'') but so often the whoops and hollers mean far more than the more jaded worldview. For, this late in the day, REM have begun to act like a band again. We should be thankful, and not a little amazed…“ (Chris Jones, BBC)
Peter Buck, guitars
Mike Mills, bass, background vocals
Michael Stipe, vocals
Recorded 2007 at Armoury Studios, Vancouver, British Columbia, Canada; Grouse Lodge Studios, County Westmeath, Ireland; and Seney-Stonewall Chapel, Athens, Georgia, United States; additional recording in Olympia Theatre, Dublin, Ireland and Mike Mills' home in Athens, Georgia
Produced by Jacknife Lee, R.E.M.
Digitally remastered