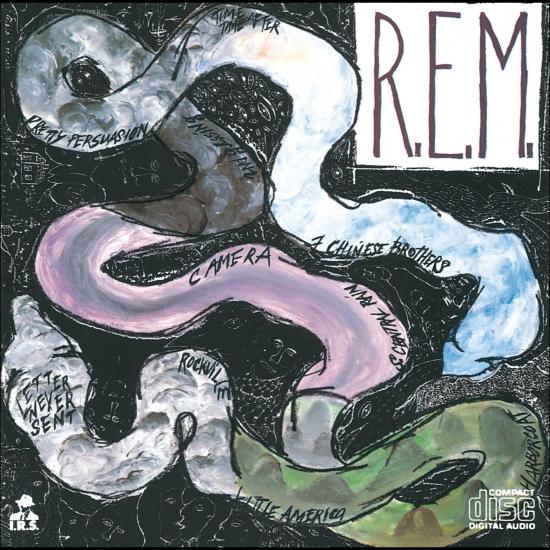 The murmuring continued with this, R.E.M.'s second album, recorded in only two weeks, and yet critical acclaim and a growing fanbase had not made the music any less elusive. From the cover depiction of a winding river/snake, the jangly music within was similarly ambiguous, drenched in alternately murky, then dazzlingly clear, images. The water theme predominates throughout side one's five-song suite, with talk of harbours, oceans and water towers, crowned by the sublime lament of 'So. Central Rain.' Later, the melancholic eulogy of 'Camera' sits comfortably beside the cod-country of '(Don't Go Back To) Rockville' and the brisk but disillusioned tour around 'Little America.' An astonishingly assured and uncommercial half-sibling to MURMUR: file under water.
'RECKONING, remarkably, deepened the band's mythology, projecting a kind of existential restlessness wrapped in webs of gorgeous guitar arpeggio and interweaving vocal textures.' (Uncut)
„The songs betrayed a folk-country influence -- the Byrds, in particular -- resulting in an album refreshingly out of fashion for 1984.' (Spin)
Michael Stipe, vocals
Mike Mills, vocals, bass
Bill Berry, vocals, drums
Peter Buck, guitar
Recorded December 8-10, 12-15, 1984 and January 10-16, 1985 at Reflection Sound, Charlotte, North Carolina
Engineered by Don Dixon and Mitch Easter
Produced by Don Dixon and Mitch Easter
Digitally remastered