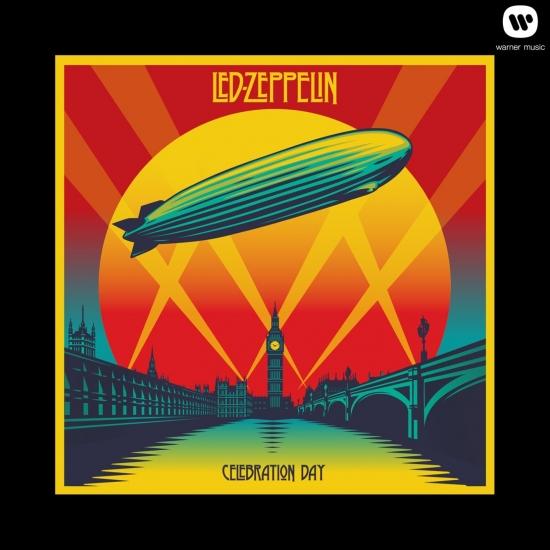 Recorded at Led Zeppelin's historic 2007 concert at London's O2 in memory of Atlantic Records founder Ahmet Ertegun, this album sees the first full reunion of the surviving members of Led Zeppelin in 27 years. With Jason Bonham filling in for his father, the late, great John Bonham, on drums, Celebration Day features 16 classics from the Led Zeppelin catalog, including 'Stairway to Heaven,' 'Whole Lotta Love,' and 'Kashmir.'
The scramble for tickets for this December 2007 Ahmet Ertegun tribute show virtually caused the Internet to crash. Money on the table for a subsequent reunion tour ran into hundreds of millions.
Such facts are evidence, like it’s needed, of the intensity of interest in Led Zeppelin 30 years after they split. There had been desultory one-off reunions, but this O2 Arena show was the full monty. And now, for the best part of 20 million applicants who missed out on tickets for Greenwich, here is the official souvenir.
Available in a variety of varyingly priced packages, Celebration Day is an opportunity to witness the power and the glory of Led Zeppelin, quite possibly for the last time, and they certainly don’t disappoint. “There are certain songs that have to be played,” Robert Plant admits here, before a shrieking ride through one of the best back catalogues in rock.
There’s a scorched-earth take on Dazed and Confused, then the band harnesses its considerable energy on Ramble On, Black Dog and Rock and Roll. By the time they get to Whole Lotta Love you could swim home on the testosterone.
But there was always more to Led Zeppelin than amps that went up to 11. You think you’d groan, but Stairway to Heaven is curiously affecting (“Hey Ahmet,” grins Plant afterwards, “we did it”), while Kashmir has the relentless drive and authority of an invading army. In My Time of Dying and Nobody’s Fault but Mine display Plant’s strengths as a singer, and the band’s empathy with the music which so inspired them. Truth be told, some of the Jimmy Page solos go on longer than The Archers, but to hear that potency harnessed and unleashed is undeniably impressive. Surprisingly, the star of the show is the drummer, young Jason Bonham. The sheer physicality of his playing is awesome and exhausting.
Following their split, Led Zeppelin have always been protective of their legacy. Celebration Day is a fitting addition to their history. Experienced in conjunction with Barney Hoskyns’ eye-opening new biography, Trampled Under Foot, this is a powerful reminder of just what made Zeppelin fly. Now, do excuse me… I think I can hear Valhalla calling… (Patrick Humphries, BBC Reviews)
Robert Plant, vocals & harmonica
Jimmy Page, guitar
John Paul Jones, keyboards & bass
Jason Bonham, drums & background vocals
Recorded live at the O2 Arena, London 12/10/2007
Audio Mixing: Alan Moulder