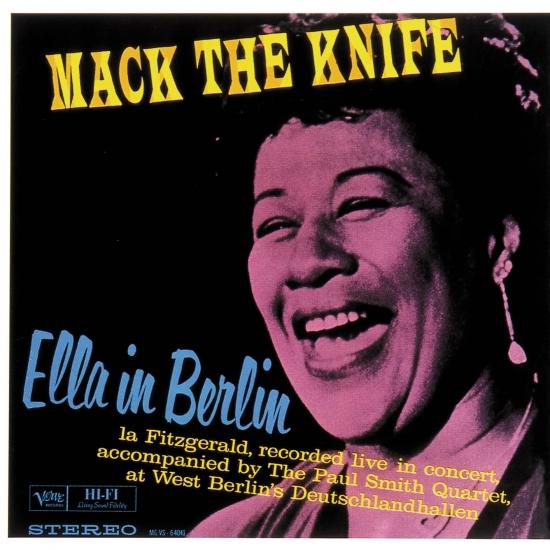 Info for Mack The Knife: Ella In Berlin (Remastered)

It entered into jazz lore when, at this 1960 Berlin concert, Ella forgot the words to Mack the Knife ; she improvised her way out of it in an inventive way that amazed even herself!
„Ella Fitzgerald was at the peak of her form during her 1960 tour of Europe. Her Berlin concert is most remembered for her hilariously inventive version of 'Mack the Knife,' during which she forgot the words and substituted ones of her own that somehow fit, amazing herself in the process. With fine support from her quartet -- pianist Paul Smith, guitarist Jim Hall, bassist Wilfred Middlebrooks, drummer Gus Johnson -- Fitzgerald is brilliant throughout the well-rounded set, with highlights including 'Misty' (a version very different from Sarah Vaughan's), 'The Lady Is a Tramp,' 'Too Darn Hot,' and a scat-filled 'How High the Moon.' This is essential music.“ (Scott Yanow, AMG)
„A 43-year-old Ella rolls through her typical routine in feisty fashion on this 1960 recording, which documents the opening show of her European tour. There's the Satchmo impersonation (a joyous 'Mack the Knife'), the lengthy scat showcase ('How High the Moon,' on which she quotes Charlie Parker's 'Ornithology'), and a bevy of Gershwin and Porter tunes. Supported by pianist Paul Smith's quartet (with the elegant Jim Hall on guitar), Ella's voice sounds earthier than usual and her phrasing is as appealing as ever. She's sublimely tender on 'Misty' and wonderfully sultry on 'Too Darn Hot.' The CD reissue includes two unreleased tracks from the Berlin concert plus two 1956 gems (including a stylish 'Love for Sale') that were mistakenly pressed on this release. Upon its initial release, the album picked up two Grammies and peaked at number 11 on the Billboard Pop chart; its acclaim was well deserved.“ (Marc Greilsamer)
Ella Fitzgerald, vocals
Paul Smith, piano
Jim Hall, guitar
Wilfred Middlebrooks, double bass
Gus Johnson, drums
Recorded February 13, 1960, at the Deutschlandhalle, Berlin
Produced by Norman Granz
Digitally remastered