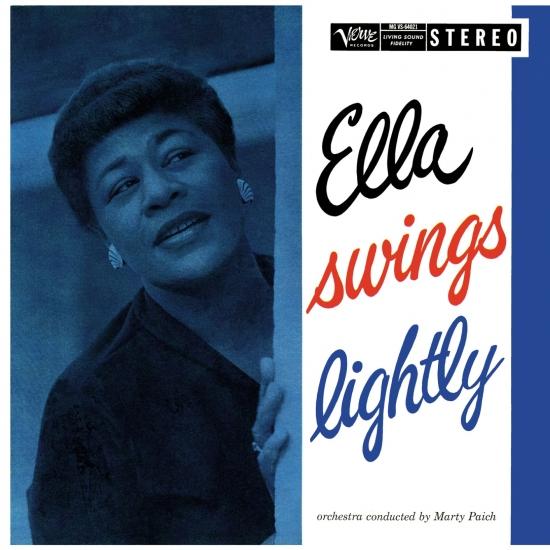 High-Res remastered edition of this 1958 album from the Jazz vocalist including bonus tracks. Ella Swings Lightly was the first of Ella Fitzgerald's very few collaborations with the great conductor and arranger Marty Paich. All of the music recorded during those 1958 sessions has been included here, as well as four rare tunes from 1959 and 1962 that complete Ella and Paich's collaborative recordings prior to 1966. Essential Jazz Classics.
On „Ella Swings Lightly“, Fitzgerald is paired with the Marty Paich Dek-tette, a ten-piece studio ensemble rooted in the cool jazz sounds of the Miles Davis Nonet and the Gerry Mulligan Tentette. Originally assembled as a one-off ensemble for an album with Mel Tormé, the dek-tette was later re-formed due to popular demand from musicians and audiences alike. The dek-tette featured a brass quintet (2 trumpets, trombone, French horn and tuba) and a trio of saxophonists (who all doubled on a variety of woodwinds) set over a rhythm section of bass and drums. Paich maintained the cool sound by keeping the trumpets in the middle register, writing melodic lines for the tuba, and excluding piano and guitar from the rhythm section. His settings featured warm mixtures of instrumental sounds and a laid-back approach to rhythm. Balancing the strength of a big band with the flexibility of a small combo, the Dek-tette was a great backing group for both jazz vocalists and instrumentalists. Paich’s arrangements were usually created in collaboration with the featured artists, but Paich had only had one or two meetings with Fitzgerald before recording “Ella Swings Lightly”. However, the settings came easily, given Paich’s long-time admiration of the vocalist. Fitzgerald’s only concern was singing without a piano, so Lou Levy was brought in for the sessions. The rest of the Dek-tette included several of Paich’s first-call men, including Bud Shank, Don Fagerquist, Bob Enevoldsen, Bill Holman, Joe Mondragon and Mel Lewis.
Ella Fitzgerald, vocals
Marty Paich Dek-tette
Recorded November 23-24, 1958 in Hollywood, Los Angeles
Produced by Norman Granz
Mastered by Bernie Grundman
Digitally remastered