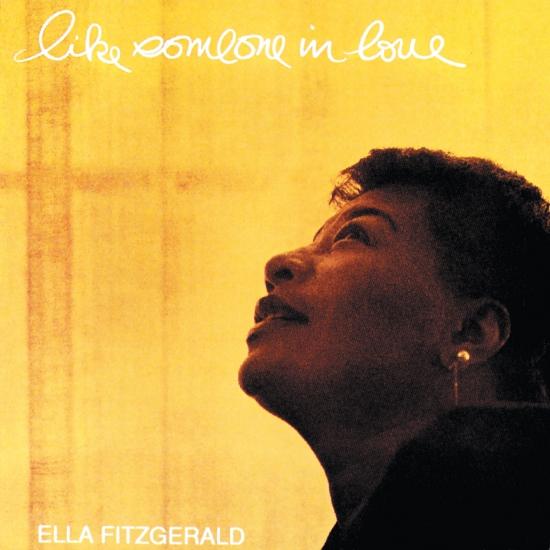 An album of sensitive arrangements by the underrated Frank DeVol, this collection was staple diet for 50s lounge romantics. Perched with a martini and a cherry in one of those triangular glasses, this is immaculate music. Fitzgerald stepped outside the pattern of recording the Songbook series and used some lesser-known writers. Both 'Hurry Home,' by Meyer, Emmerick and Bernier, and 'Night Wind,' by Rothberg and Pollock, are strong tracks. She later re-recorded 'How Long Has This Been Going On,' while the title track is so perfect it could never be done again.
„I generally don't like it when jazz singers are accompanied by string orchestras, as such backings can dilute the jazz content. However, the accompaniments here are sufficiently discreet not to get in the way of that great jazz vocalist, Ella Fitzgerald. In fact, the general understatement of the backings helps to highlight Ella's supreme vocal qualities.
This album contains the second and third sessions that Ella recorded with Frank DeVol in 1957 for the Verve label. Ella was at the peak of her powers, having signed with Norman Granz in 1955 and already recorded the first of her pioneering 'Songbook' albums for Verve. She savours every song with devoted care, and she can continually surprise the listener with how she handles songs which mostly come from the Great American Songbook.
To take a few examples of how Fitzgerald brings her individuality to these songs, hear how she inserts a little sway into the second line of More Than You Know; how the ending of We'll Be Together Again diverges slightly from what you were probably expecting; and the way she confidently handles the difficult intervals of Midnight Sun.
It goes without saying that her intonation is pitch-perfect and that she delivers each song as if she is thinking about what the lyrics mean. On several tracks the effect is enhanced by the mellifluous sound of Stan Getz's tenor sax. And the final track is a bonus instrumental version of the title-track, played by Stan's quartet without vocals.
Most of the songs are slow or mid-tempo, so you might say that this is an 'easy listening' album. But it's also as near perfection as a jazz singer's album can be.“ (Tony Augarde, MusicWeb International)
Ella Fitzgerald, vocals
Ted Nash, alto saxophone
Stan Getz, tenor saxophone
Lou Levy, piano (track 20)
Leroy Vinnegar, bass (track 20)
Stan Levey, drums (track 20)
Frank DeVol Orchestra
Frank DeVol, conductor
Digitally remastered