Live It Up The Isley Brothers 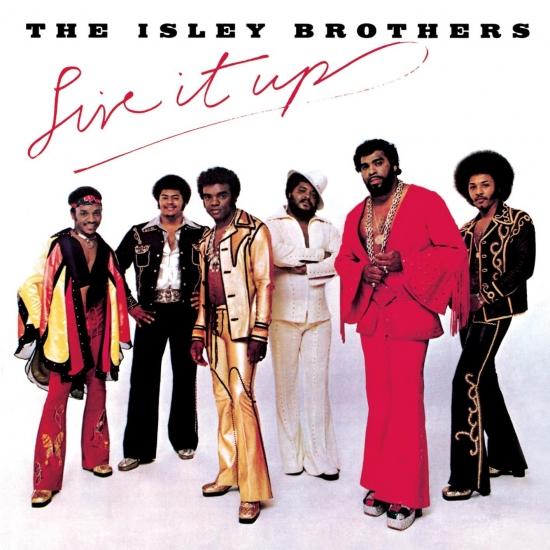 Info for Live It Up

Mid 70s genius from the Isley Brothers – a record that has them firmly hitting their superstar mode with a fantastic blend of mellow soul and guitar-heavy funk! The record's got a sense of class, care, and poise that's head and shoulders above most of the group's contemporaries – an ability to rock out one minute, then slow things down for a beautiful ballad the next – all while maintaining enough credibility to still hold onto older fans, yet also reach out to a much bigger audience in the mainstream.
„One of the many classic albums the Ohio natives recorded. This set features two up-tempo numbers: the title track "Live It Up" and "Midnight Sky." The former is a soulful funk track paced by a humpin' bassline, robust background vocals, and Ernie Isley's electrifying guitar solos. It checked in at number four on the Billboard R&B charts. The latter is a smoother dance number in which Ronald Isley's vocals go from a cool, calm delivery to a resolute clamor. It peaked at number eight. Both have lengthy vamps, ideal for parties. As for the romance, "Hello It's Me" and "Brown Eyed Girl" are two gems. "Hello It's Me" is the classic ballad. Ronald's melodic intro is mesmerizing as he finesses the lyric "hello," which sets the tone for this beautiful number. His artistic interpretation of the lyric is demonstrated without blemish. This song was formerly recorded by Todd Rundgren, who also wrote it. "Brown Eyed Girl" is a mid-tempo number that's seasoned with a folk-like guitar and the rich vocals of Ronald. Neither single was ever a release, but today both are radio regulars.“ (Craig Lytle, AMG)
Ronald Isley, lead vocals
O'Kelly Isley, Jr., background vocals
Rudolph Isley, background vocals
Ernie Isley, guitars, drums, percussion
Marvin Isley, bass
Chris Jasper, electric piano, Clavinet, ARP synthesizers, piano
Recorded 1974 at The Record Plant, Los Angeles, California
Engineered by Malcolm Cecil, Robert Margouleff
Produced by The Isley Brothers
Digitally remastered