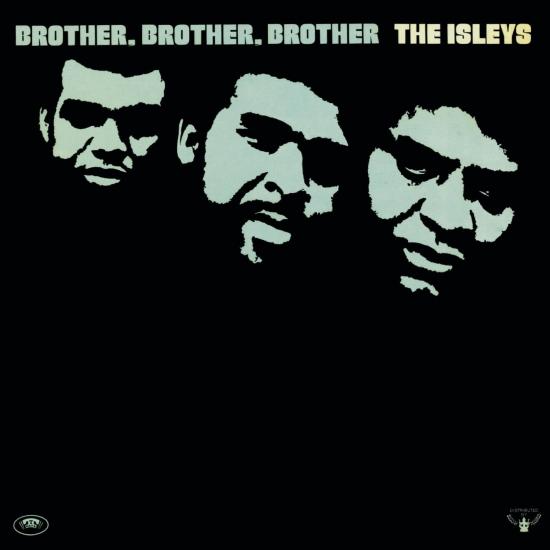 An amazing record! This one's probably our favorite Isley Brothers album of all time – and it's a perfect blend of all the styles they were into at the time – heavy funk, sweet soul, folksy rock, and rolling uptempo grooves! The Brothers handle all styles equally well, and the album's a real delight as it skips effortlessly from track to track – always bringing a fresh sound to the experience of listening, and continuing to delight us year after year with the Isley's greatness! Includes the classic extended cut "Love Put Me On the Corner", a baroque soul symphony in itself; an amazing remake of "It's Too Late" that's way different than the original; the middle-class anthem "Work To Do"; and the funky cuts "Pop That Thang" and "Layaway".
„With 1972's Brother, Brother, Brother, younger brothers Ernie and Marvin Isley, along with in-law relative Chris Jasper, began to play major roles in the Isley Brothers' sound. This also marked their first attempt to "Isley-ize" classics made famous by others. Their rendition of Carole King's "It's Too Late" rivals the original; Ron Isley sings the tender ballad in a softer voice then he used on previous recordings. An update of Jackie DeShannon's "Put a Little Love in Your Heart" is an uplifter. They didn't completely alienate fans of their harsher sound, the rocking, humorous "Pop That Thang" and "Lay Away" are fine examples of R&B and rock. "Pop That Thang" has a sloopy beat and biting lyrics, while "Lay Away" takes off on the popular buying option before the advent of the credit card. the Isley Brothers were big Carole King fans, in addition to "It's Too Late," they perform two other King songs, "Brother, Brother" and "Keep on Walkin'"; the latter is coupled with "Sweet Season." Their own "Work to Do" is a stone rocker that has been recorded by many, including the Average White Band, who scored big with the cooker 3 years after its release, it remains one of the Isley Brothers' most requested songs.“ (Andrew Hamilton, AMG)
"...The signature vocal howls, Ernie's aching guitar strokes, and Jasper's churchy organ notes gave--and continue to give--these tracks life and energy as timeless as their architects..." (Vibe)
Ronald Isley, lead and background vocals
O'Kelly Isley, Jr., background vocals
Rudolph Isley, background vocals
Ernie Isley, guitars
Marvin Isley, bass
Chris Jasper, piano, keyboards
George Moreland, drums, percussion
Karl Potter, congas
Recorded 1972, Media Sound Studios and A&R Studios, New York, New York
Engineered by Melvin Delugg
Produced by The Isley Brothers
Digitally remastered