Go for Your Guns The Isley Brothers 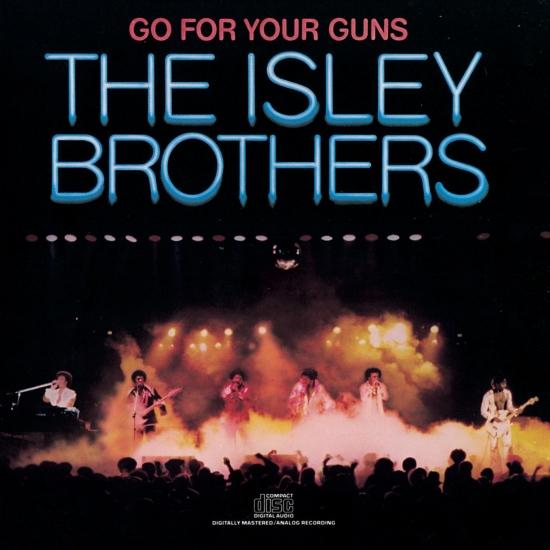 Info for Go for Your Guns

On 1977's „Go for Your Guns“ the Isley Brothers can be heard modifying their sound yet again to suit the times. The group's usual wild-card eclecticism is streamlined here, through their previous incarnations as smooth soulsters, purveyors of guitar-based psychedelia, and edgy funk-rockers can be heard on "Footsteps in the Dark," "Voyage to Atlantis," and "Livin' in the Life," respectively. What marks „Go for Your Guns“ is the unified sound and clean production of the album, which brings the band's diverse styles under one aesthetic umbrella.
The opening cut, "The Pride," has a steady, four-on-the-floor beat with a bit of disco-funk sheen, and sets the tone for the album. Thumping, popping bass and tight, rhythmic grooves are at the forefront here, but the Isleys still surprise, especially with secret weapon Ernie Isley on board throwing out blistering, Hendrix-inspired guitar leads (as on "Climbin' Up the Ladder" and the driving instrumental title track). As always, there is plenty of soulful singing to be found; the Isleys' vocal style has lost none of its luster here. This is a fine album of classic late-'70s funk from one of music's most talented, enduring families.
„Every ten years the Isley Brothers reinvented themselves and managed to snatch as many consumer dollars and generate enough chart action to remain contemporary. Go for Your Guns was a further attempt by the Isleys to broaden their fan base; earlier in the decade they redid many rock standards to expand from the R&B base they were mired in. the Isleys shoot for the moon and never make it, but they always land among the stars. This seven-song set got played to death on urban radio. "Living in the Life" rocks so hard it makes cheap speakers pop; "Go for Your Guns" is an instrumental jam featuring the second generation Isley Brothers: Ernie, Marvin, and Chris Jasper (Rudolph Isley's brother-in-law). The lovely, mystical "Voyage to Atlantis" is a staple of their live concerts, its opening strains acknowledged by deafening, enthusiastic applause. Like many Isley tunes, the loping, mid-tempo love tale "Footsteps in the Dark" has been sampled silly; "Pride" is a steady beater with uplifting words for the downtrodden. Nothing dull, no filler.“ (Andrew Hamilton, AMG)
Ronald Isley, vocals
Rudolph Isley, background vocals
Kelly Isley, background vocals
Ernie Isley, guitars, drums
Marvin Isley, bass
Chris Jasper, electric piano, ARP synthesizers, keyboards
Recorded 1976-77 at Bearsville Studios, Bearsville, New York
Produced by The Isley Brothers
Digitally remastered