Never For Ever (2018 Remaster) Kate Bush 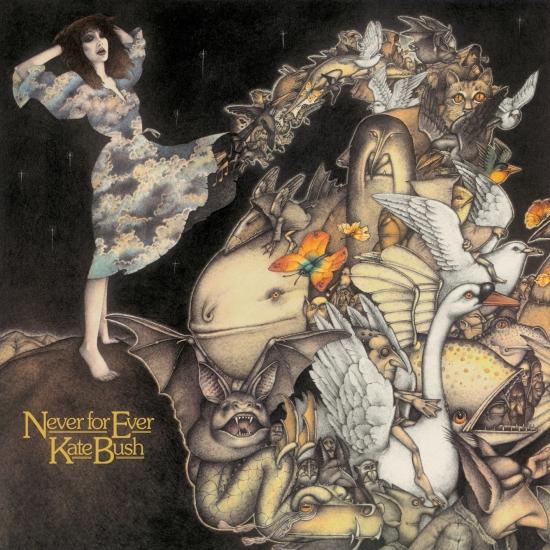 Never For Ever is Kate's third studio album and was released in 1980.
Never For Ever was Kate's first no.1 album. It was also the first ever album by a British female solo artist to top the UK album chart, as well as being the first album by any female solo artist to enter the chart at no.1.
The album was favourably received by music critics at the time, save for a curiously critical review in Record Mirror: "...one of the most empty dull packets of poop one could ever hope to avoid". Soundswas equally critical: "This album has been a long time in the making, but I'm not sure that this is always a good thing." Melody Maker was more enthusiastic: "Any doubts that this is the best Bush album yet are finally obliterated by the inspired unorthodoxy of the production. I had to look to see if Steve Lillywhite wasn't at the controls - it's that clean and fresh".
"Never for Ever has Kate Bush sounding vocally stable and more confident, taking what she had put into her debut single "Wuthering Heights" from 1978 and administering those facets into most of the album's content. Never for Ever went to number one in the U.K., on the strength of three singles that made her country's Top 20. Both "Breathing" and "Army Dreamers" went to number 16, while "Babooshka" was her first Top Five single since "Wuthering Heights." Bush's dramatics and theatrical approach to singing begin to solidify on Never for Ever, and her style brandishes avid seriousness without sounding flighty or absurd. "Breathing," about the repercussions of nuclear war, conveys enough passion and vocal curvatures to make her concern sound convincing, while "Army Dreamers" bounces her voice up and down without getting out of hand. "Babooshka"'s motherly charm and flexible chorus make it one of her best tracks, proving that she can make the simplest of lyrics work for her through her tailored vocal acrobatics. The rest of the album isn't quite as firm as her singles, but they all sport a more appeasing and accustomed sound than some of her past works, and she does manage to keep her identity and characteristics intact. She bettered this formula for 1985's Hounds of Love, making that album's "Running Up That Hill" her only Top 40 single in the U.S., peaking at number 30." (Mike DeGagne, AMG)
Kate Bush, lead & harmony vocals, piano, Yamaha CS80 synth (1,4)
Brian Bath, acoustic (3,4,10) & electric (1,6,7,11) guitars, backing vocals (6,10) Alan Murphy / acoustic (4,10) & electric (1,2,6-8,11) guitars, bass & backing vocals (10)
Paddy Bush, balalaika (1), sitar (2), koto (4), psaltery (5), harmonica & saw (6), talkbox (7), mandolin (10), bass vocals (2)
Max Middleton, Fender Rhodes (1,3,5,6,11), MiniMoog (5), string arrangements (3)
Duncan Mackay, Fairlight synth (4,10)
Mike Moran, Prophet synth (5)
Larry Fast, Prophet synth (11)
John Giblin, fretted bass (1) & fretless bass (11)
Del Palmer, fretted bass (5-7) & fretless bass (3)
Preston Heyman, percussion (2,3,5,6), drums (3,5-7), backing vocals (6)
Stuart Elliot, drums (11), bodhrán (10)
Morris Pert, timpani (4), percussion (11)
Kevin Burke, violin (7)
Joseph Skeaping, viol, string arrangements (8)
Adam Skeaping, viol, string arrangements (8)
Gary Hurst, backing vocals (1)
Ian Bairnson, bass vocals (2)
Roy Harper, backing vocals (11)
The Martin Ford Orchestra (3,6)
Produced by Kate Bush, Jon Kelly
Digitally remastered