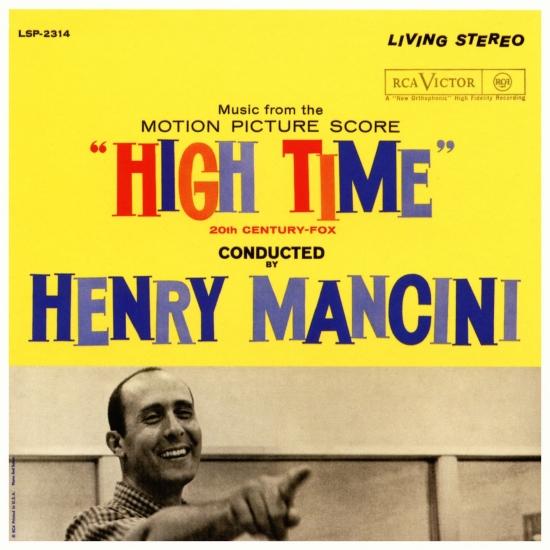 "High Time is a contrived 1960 Blake Edwards' comedy starring Bing Crosby about a middle-aged widower who returns to college and tries to fit in with the youngsters. This combination of comedy and college themes gives the score's composer, Henry Mancini, an opportunity not only to express his sense of fun which surfaces in so many of his scores, but his immaculate jazz timing.
The 'High Time' main theme is typical Mancini romp with a march feel, plenty of brass and drums. The second cue, 'Moon Talk' is more subdued and romantic with a decidedly after dark influence. Cues like 'The Old College try Cha-cha', 'A Mild Blast' and 'So Neat' are typical sixties Mancini jazz with his unique bend of spontaneity and freshness which feels as comfortable as an old pair of slippers. The album also contains a Mancini singers' version of the Sammy Cahn 'The Second Time Around'.
The album finishes with a big band jazz cue called 'Tiger!' which is bound to set the feet tapping and the heart jumping.
This is an interesting album of 1960s Mancini, which is not that well known but is extremely entertaining and should be a must for any Mancini or sixties fan." (Andrew Keech, www.musicfromthemovies.com)
Henry Mancini And His Orchestra
Henry Mancini, conductor
Recorded in 1960 in Hollywood, Los Angeles
Produced by Dick Peirce
Digitally remastered