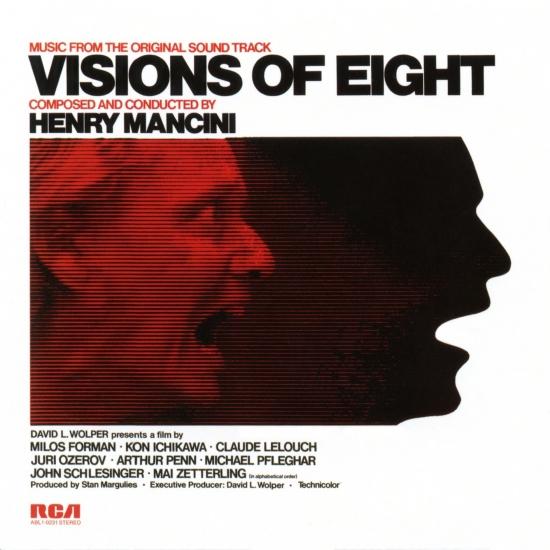 Info for Visions of Eight (The Original Sound Track Recording)

Two 70s moments from Henry Mancini – back to back on a single CD! First up is Visions Of Eight – a wonderful Henry Mancini soundtrack, and one of his most overlooked – possibly because it was scored for an odd little film that featured the work of eight different directors! The mood of the film changes a lot based on the directorial style, but the score's got some really wonderful moments that offer the best that Mancini had to offer at the time – including some really nice lightly dancing groovers that sparkle with a 70s bossa style – and others that have that cool, pillowy approach to sound that Henry was using on his great mellow records of the period. Titles "Salute To The Olympians", "Ludmilla's Theme", "Spaced Out", "Warm Up", "Soft Flight", and "The Race". Just You & Me Together Love is a collaboration with poet John Laws – a project that almost recalls some of the Rod McKuen/Anita Kerr projects of the late 60s, but which has a deeper, more sophisticated Mancini feel! Laws reads his own words, but does so in a subtle, expressive way – often just doing a short passage to start things off, as Hank then follows with some cool soundtrack-styled orchestrations. Most titles are short, but have a really rich feel – and titles include "The Scene Of Your Nearness", "Closer", "Just You & Me Together Love", "Closer", "Empty Glasses Crumpled Sheets", and "The Rhythm Of Wanting".