Exclusively for My Friends: Travelin' On, Vol. VI The Oscar Peterson Trio 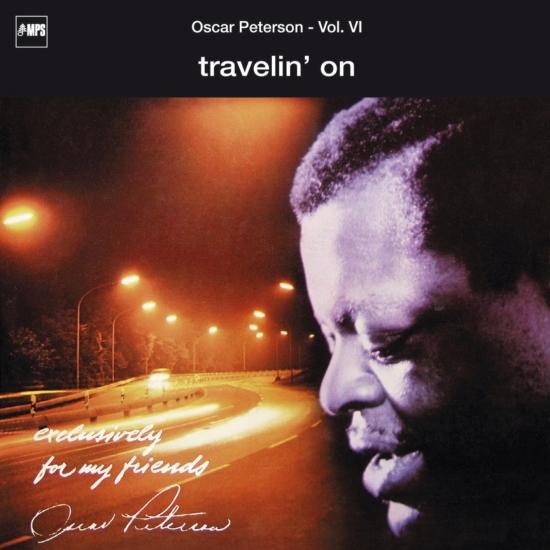 Info for Exclusively for My Friends: Travelin' On, Vol. VI

„This is yet another memorable concert by the Oscar Peterson Trio recorded in Hans Georg Brunner-Schwer's excellent studio. With bassist Sam Jones and drummer Bobby Durham, Peterson tears into the old gospel favorite 'Travelin' On' with a passion second to none. Following it is a beautiful treatment of Johnny Mandel's timeless ballad 'Emily,' which runs for over ten minutes but never loses its impact. Durham sets the pace with his soft percussion to set up Antonio Carlos Jobim's 'Corcovado' (later known as 'Quiet Nights'), though Peterson devours the song whole with a breathtaking display of his formidable technique.
Francy Boland's 'Sax No End' was a relatively new composition, having been recorded for the first time just the previous year by the Kenny Clarke-Francy Boland Big Band. But one can almost hear a larger ensemble by listening to Peterson's virtuoso interpretation in an uptempo setting, assisted by Jones' agile bass and Durham's steady percussion. Peterson cools off his audience with an extended exploration of Benny Carter's 'When Lights Are Low,' though his fresh approach makes it seem like a brand new composition. Like other releases in Oscar Peterson's Exclusively for My Friends series, Travelin' On is warmly recommended.“ (Ken Dryden)
Oscar Peterson, piano
Sam Jones, double bass
Bobby Durham, drums
Recorded at the private studio of Hans Georg Brunner-Schwer on 30.-31. March 1968
Recorded and engineered by Hans Georg Brunner-Schwer
Produced by Hans Georg Brunner-Schwer
Digitally remastered