Exclusively for My Friends: Action, Vol. I (Live) The Oscar Peterson Trio 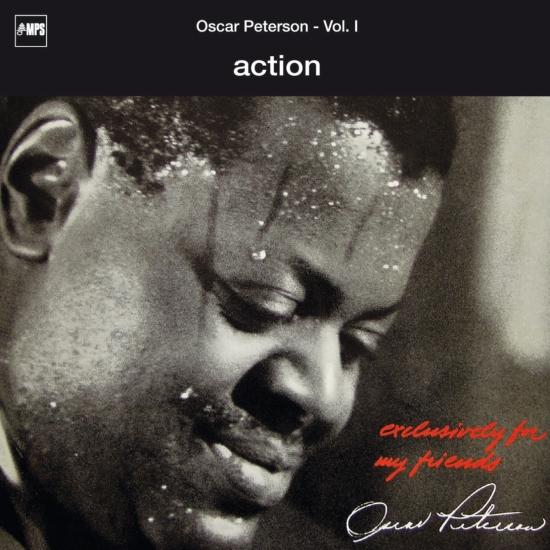 Info for Exclusively for My Friends: Action, Vol. I (Live)

In the early '60s Oscar Peterson befriended producer Hans Georg Brunner-Schwer, who recorded Peterson on a number of occasions in his private studio while the veteran pianist was still signed to Verve. Action is made up of the earliest sessions recorded by Brunner-Schwer, featuring Peterson with bassist Ray Brown and drummer Ed Thigpen circa 1963 and 1964.
„Before an audience invited by the producer, the trio begins with a midtempo 'At Long Last Love,' followed by a gently swinging treatment of Billy Taylor's infrequently performed 'Easy Walker' and an understated interpretation of 'Tin Tin Deo.' Peterson's lyricism is at its peak in his arrangements of 'I've Got a Crush On You' and 'A Foggy Day.' But it is the trio's extended and intricate workout of 'Like Someone in Love,' clocking in at just over 11 minutes, that leaves the most lasting impression. Not only is Peterson extremely reserved, but Brown's first-rate solo and Thigpen's delicate brushwork help to make this track a masterpiece. Previously reissued as a part of the Exclusively for My Friends box set in 1992, this HighResAudio Master features even better sound.“ (Ken Dryden)
Oscar Peterson, piano
Ray Brown, double bass
Ed Thigpen, drums
Recorded at the private studio of Hans Georg Brunner-Schwer on 27. March 1963 und 24. April 1964
Recorded and engineered by Hans Georg Brunner-Schwer
Produced by Matthias Kunnecke and Hans Georg Brunner-Schwer
Digitally remastered