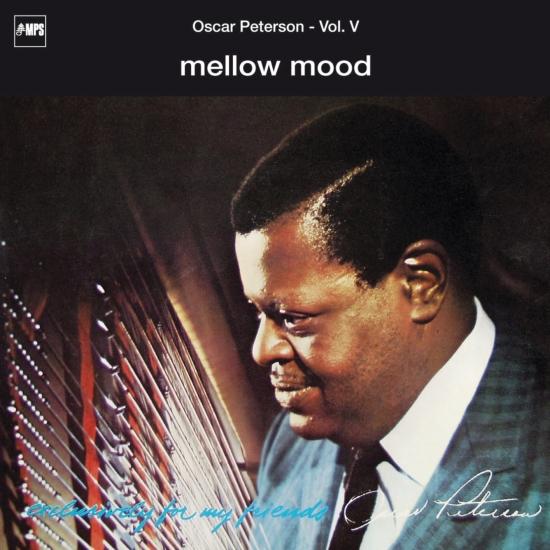 „The fifth volume of Oscar Peterson's Exclusively for My Friends series is another lively trio affair with Sam Jones and Bobby Durham, though the album title Mellow Mood is a bit deceptive. 'In a Mellow Tone' plunges in full force with a bluesy performance, with the audience responding to Peterson's opening solo as Durham switches from brushes to sticks. Peterson's amusing detour into Mercer Ellington's 'Things Ain't What They Used to Be' and Jones' driving bass add to its appeal. His arrangement of Horace Silver's 'Nica's Dream' begins quietly before he slowly turns on the turbochargers in an inspired performance.
Gone is the overly dramatic introduction to 'On Green Dolphin Street' heard during the earlier 1961 sessions at the London House; this interpretation is far more compelling as it doesn't seek to overwhelm the listener with the pianist's technique. The snappy take of 'Summertime' is infused with a blues feeling in a brisk setting, while 'Who Can I Turn To' evokes the memory of Art Tatum, though this composition was obviously never recorded by Oscar's good friend. Peterson fires up the tempo as Jones and Durham join him.“ (Ken Dryden)
Oscar Peterson, piano
Sam Jones, double bass
Bobby Durham, drums
Recorded at the private studio of Hans Georg Brunner-Schwer on 30.-31. March 1968
Recorded and engineered by Hans Georg Brunner-Schwer
Produced by Hans Georg Brunner-Schwer
Digitally remastered