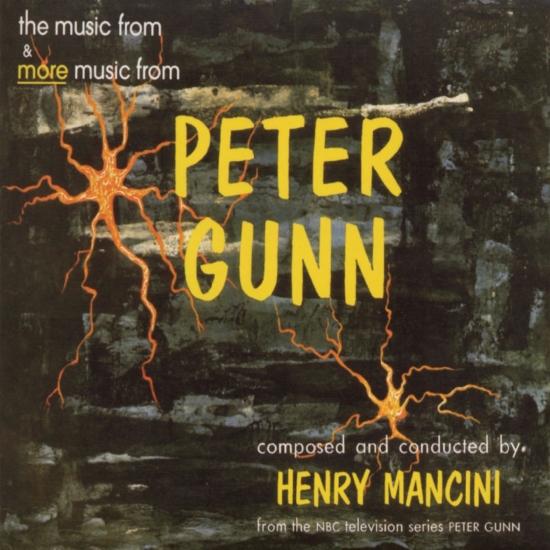 This is not only a great recording but a key piece of jazz and pop music history. Back in 1958, "Peter Gunn" was one of the unexpected hits of the new television season, capturing the imagination of millions of viewers by mixing private eye action with a jazz setting. Composer Henry Mancini was more than fluent in jazz, and his music nailed down the popularity of the series. With the main title theme, a driving, ominous, exciting piece of music to lead off the album, "The Music from Peter Gunn" became a huge hit, charting extraordinarily high for a television soundtrack and doing so well that RCA Victor came back the next year asking for a second helping ("More Music From Peter Gunn") from Mancini.
The music holds up: "Session At Pete’s Pad" is a superb workout for the trumpets of Pete Candoli, Uan Rasey, Conrad Gozzo, and Frank Beach, while Barney Kessel’s electric guitar gets the spotlight during "Dreamsville"; and "Sorta Blue" and "Fallout" are full-ensemble pieces that constitute quintessential 'cool' West Coast jazz of the period. In other words, it’s all virtuoso orchestral jazz, presented in its optimum form.
Ted Nash, alto saxophone Ronnie Lang, alto saxophone Dick Nash, trombone Milt Bernhart, trombone Pete Candoli, trumpet Johnny T. Williams, piano Larry Bunker, vibraphone Rolly Bundock, bass Jack Sperling, drums Henry Mancini, conductor
Recorded on August 26 and 31, and Sept 4 and 29 1958 in Hollywood, Los Angeles
Produced by Simon Rady
Digitally remastered