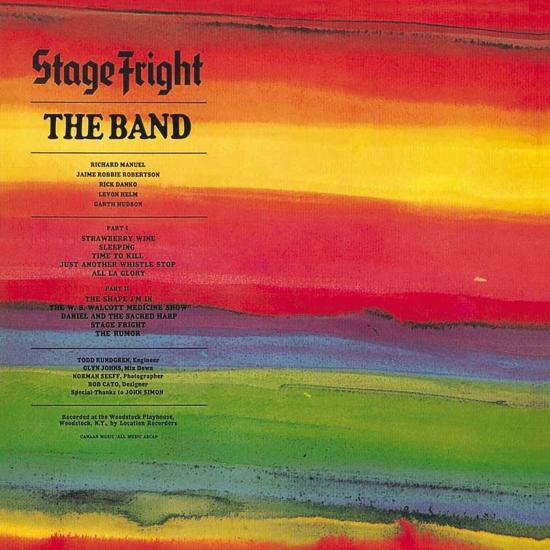 „The Band's third studio album is also their third-best studio album, and that isn't bad. It's not as synchronous as Music from Big Pink or as overpowering as The Band, but that's part of its appeal. The quintet's first two albums were such towering achievements that the group came to lean on its songs, turning the lion's share of them into concert staples. Stage Fright is littered with lesser-known Robbie Robertson compositions possessing more modest charms than the overplayed likes of 'The Weight' and 'The Night They Drove Old Dixie Down.' The title track is uncommonly hard-eyed and modern; Richard Manuel's vocal, like most of his turns at the mic, is sparkling. (Manuel also shines on the reflective 'Sleeping' and the uptempo 'Just Another Whistle Stop'). 'All La Glory' is a gorgeous lullaby, while 'Time to Kill' sounds like the Band doing Creedence Clearwater Revival. This isn't the place to discover this great North American band, but it's definitely a stop worth taking before your exploration is completed.“ (Steven Stolder)
Robbie Robertson, guitar, keyboards, vocals
Rick Danko, bass, violin, vocals
Levon Helm, guitar, drums, vocals
Garth Hudson, keyboards, saxophone
Richard Manuel, drums, keyboards, vocals
Recorded at the Woodstock Playhouse, Woodstock, N.Y., by Location Recorders
Engineered by Todd Rundgren
Mixed by Glyn Johns
Digitally remastered