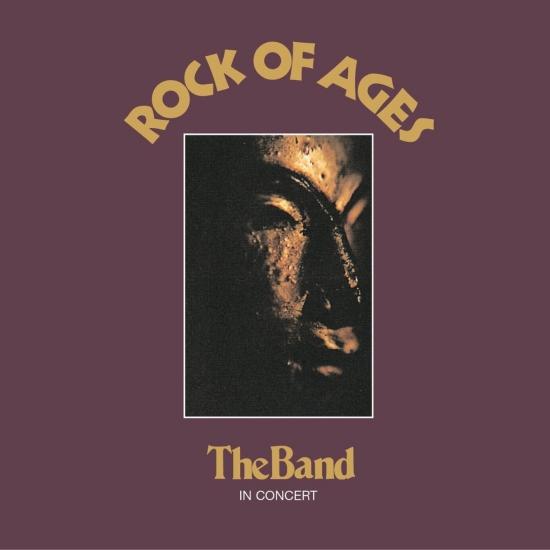 Long before they became The Band, these four Canadians and one southern rebel rocked the rooftops off Canada as The Hawks, Ronnie Hawkins's fierce back-up band. Their non-stop performing took them through nearly every bar in the region, and the group developed into a tightly wound rock unit. It is therefore interesting that, as The Band, the group was known more for its reluctance in the live arena than for its live prowess. This was in part due to leader Robbie Robertson's stage jitters, which seemed to worsen as The Band's status swelled. ROCK OF AGES provides a telling account of what glorious heights The Band was capable of when it tore loose onstage.
Here the five members function as one shifting, interlocking force, summoning Americana, phantom soul, and barroom rockers with ease and freedom. Garth Hudson conjures pure organ voodoo with an impromptu instrumental, 'The Genetic Method,' before the band launches into the otherworldly 'Chest Fever.' Elsewhere the live document percolates with similarly inspired fervor. New Orleanian Allen Touissant must receive his share of the credit, as his horn arrangements pump and drive The Band's earth-drenched rock up from the dirt and into the stratosphere.
'...They put across their best songs and a few covers with touches of ecstasy...' (Down Beat)
'...A radically restructred live album, their past glories terrifically enhanced by the presence of Allen Toussaint's crack horn section...Now with an additional 10 tracks, the entire concert is presented as it was...' (Mojo)
'...Among the extras for diehards to gorge on: a CD's worth of unreleased live outtakes from 1972's ROCK OF AGES, including 4 songs with Bob Dylan.' (Entertainment Weekly)
Rick Danko, vocal, bass, violin
Levon Helm, vocal, drums, mandolin
Garth Hudson, organ, piano, accordion, tenor and soprano saxophone solos
Richard Manuel, vocal, piano, organ, clavinet, drums
Robbie Robertson, guitar, backing vocal, introduction
Additional musicians:
Howard Johnson, tuba, euphonium, baritone saxophone
Snooky Young, trumpet, flugelhorn
Joe Farrell, tenor and soprano saxophones, English horn
Earl McIntyre, trombone
J. D. Parran, alto saxophone and E-flat clarinet
Bob Dylan, vocal, guitar
Recorded from December 28–31, 1971 at Academy of Music, New York City
Engineered by Phil Ramone, Mark Harman
Produced by The Band
Digitally remastered