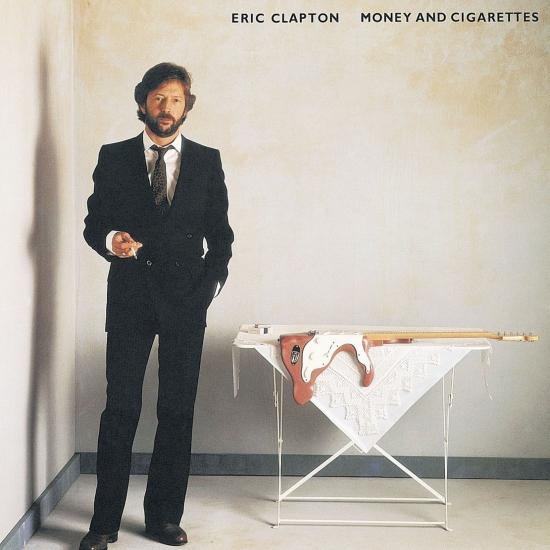 Info for Money And Cigarettes (Remastered)

Money and Cigarettes marked several important turning points in Eric Clapton's recording career: his debut release on his own Duck imprint; the first album he made after giving up drinking; and marked his working with new players (with the exception of second guitarist Albert Lee) including Stax Records veteran bassist Donald 'Duck' Dunn and Muscle Shoals drummer Roger Hawkins, also bringing in guest guitarist Ry Cooder.
His new songs reflected on his changed condition, with 'Ain't Going Down,' a thinly veiled musical rewrite of the Jimi Hendrix arrangement of 'All Along the Watchtower,' serving as a statement of purpose that declared, 'I've still got something left to say.' Other notable hits include 'The Shape You're In' the acoustic ballad 'Pretty Girl' and covers of Sleepy John Estes' 'Everybody Oughta Make a Change' (significantly placed as the album's leadoff track), Albert King's 'Crosscut Saw,' and Johnny Otis' 'Crazy Country Hop.'
Just as 1974's 461 Ocean Boulevard marked a confident return from the drug-aggravated funk that followed Layla, Eric Clapton's first album for Warner Bros. is an unexpected show of renewed strength after a debilitating illness and too many sleepy records. Stylistically, Money and Cigarettes is no great leap forward from such recent Clapton blues-pop snoozers as Backless and Slowhand. He still mixes rote blues covers and barely original shuffles cut from J.J. Cale's 'After Midnight'/'Cocaine' mold with a shy, almost embarrassed understatement that is easily mistaken for superstar sloth. But the electricity quietly racing through Clapton's crusty baritone and the saucy cluck of his and Ry Cooder's dueling slide guitars in the album's opener, a frisky cover of the old Sleepy John Estes number 'Everybody Oughta Make a Change,' may catch you napping.
Bassist Donald 'Duck' Dunn (one of Booker T's MGs) and drummer Roger Hawkins (of the Muscle Shoals Rhythm Section) put a solid boot into that first track, kicking hard and steady behind Clapton and Cooder's slippery licks. Albert Lee, a triple threat on rhythm guitars, keyboards and background vocals, pumps the beat up with choppy, burbling organ fills. The next cut, Clapton's own 'The Shape You're In,' cranks up into a sharp boogie cruiser. His vocals are set off by discreet Jordanaires-style harmonies in the chorus, while his quick guitar bursts alternate with Cooder's tensile Fender-bending during the solo break.
Certainly the best opening to a Clapton album since the one-two punch of 'Have You Ever Loved a Woman' and 'Presence of the Lord' on 1975's swaggering, live E.C. Was Here, these performances and most of the eight that follow show a more assertive, more vocally and instrumentally articulate Clapton. Egged on by a band of his peers (Ry Cooder gives him no more slack on guitar than Duane Allman did in Derek and the Dominos) and charged by the invigorating crack of Tom Dowd's production, he plays guitar solos that ring with authority and, occasionally, the thrill of discovery.
Lyrically, Clapton's new songs are hardly poetry in overdrive. 'Man Overboard' and 'Man in Love' are fattened out by baby-I-gotta-have-you bromides that he manages to invest with some vocal conviction. Yet, the overriding concern of the album's more forceful songs is the pain of excess. Both 'The Shape You're In' and 'Slow Down Linda' are darker variations on the boy-chases-fast-filly theme, Clapton trying to wean his girl off the bottle in the former with his voice of experience ('I'm just telling you baby 'cause I've been there myself').
Like most of Clapton's recent solo records, Money and Cigarettes makes no claim to greatness. Still, the simple, unaffected blues power at work here is surprising and refreshing. As the chorus in Clapton's cover of Johnny Otis' 1958 party rocker 'Crazy Country Hop' goes: 'Ooh wee oh oh ooh la la/Let's rock & roll.' On Money and Cigarettes, Clapton offers no more and gives no less. (David Fricke, Rolling Stone)
Eric Clapton, vocals, electric & slide guitar
Ry Cooder, guitar
Albert Lee, keyboards, guitar, vocals
Donald 'Duck' Dunn, bass
Roger Hawkins, drums
John Sambataro, background vocals
Chuck Kirkpatrick, background vocals
Produced by Tom Dowd
Recorded at Compass Point Studios, Nassau, Bahamas
Digitally remastered.