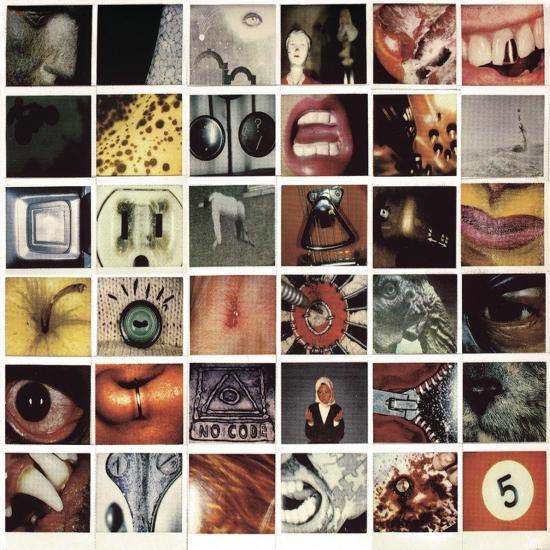 Info for No Code (Remaster)

Pearl Jam's ambitious and mystical „No Code“ is no more a grunge album than Nirvana's MTV Unplugged was a punk album, which shouldn't come as a surprise to anybody who's been listening all along. Even while helping to codify the droning heavy-metal blare of grunge, Pearl Jam has fought that code, breaking the rules of the music as defiantly as the band's business practices defy the rules of the music industry. By now, Pearl Jam can, and does, employ Indian drones, psychedelic rock, punk and folk without reaching.
„No Code“, the band's fourth album, opens with 'Sometimes,' a prayer that slowly rises toward an anthemic chorus. But the song pulls back before it gets there, as if the band's goal is to embody the smallness of all of us. Pearl Jam still, clearly, believes in the awesome power of rock: In 'Habit,' Eddie Vedder nearly goes hoarse ranting at a friend who's picked up a dangerous one, and in 'Red Mosquito,' the band works up from a folk-rocky waltz into a '60s acid-rock whirl. But much of „No Code“ finds Pearl Jam pulling away from such large notions. 'Who You Are,' one of a few songs that seem directly inspired by Vedder's recent collaboration with Pakistani singer Nusrat Fateh Ali Khan (on the Dead Man Walking soundtrack), features droning guitars, tribal drumming and a Buddhist lyric. Even within the Pete Townshend-like electric-guitar strum and vocal wailing of 'In My Tree,' Vedder seems to be searching not for rock and roll experience, but for spiritual innocence.
„A strange phenomenon with anthemic hard rock bands is that when they begin to mature and branch out into new musical genres, they nearly always choose to embrace both the music and spirituality of the East and India, and Pearl Jam is no exception. Throughout No Code, Eddie Vedder expounds on his moral and spiritual dilemmas; where on previous albums his rage was virtually all-consuming, it is clear on No Code that he has embraced an unspecified religion as a way to ease his troubles. Fortunately, that has coincided with an expansion of the group's musical palette. From the subtle, winding opener, 'Sometimes,' and the near-prayer of the single, 'Who You Are,' the band reaches into new territory, working with droning, mantra-like riffs and vocals, layered exotic percussion, and a newfound subtlety. Of course, they haven't left behind hard rock, but like any Pearl Jam record, the heart of No Code doesn't lie in the harder songs, it lies in the slower numbers and the ballads, which give Vedder the best platform for his soul-searching: 'Present Tense,' 'Off He Goes,' 'In My Tree,' and 'Around the Bend' equal the group's earlier masterpieces. While a bit too incoherent, No Code is Pearl Jam's richest and most rewarding album to date as well as their most human. They might be maturing in a fairly conventional method, but they still find new ways to state old truths.“ (Stephen Thomas Erlewine, AMG)
Jeff Ament, bass, guitar, Chapman, vocals
Stone Gossard, guitar, vocals, piano, lead vocals on 'Mankind'
Jack Irons, drums
Mike McCready, guitar
Eddie Vedder, lead vocals, guitar, harmonica
Recorded July 12, 1995 – May 1996 at Chicago Recording Company (Chicago, Illinois, USA), Kingsway Studio (New Orleans, Louisiana, USA), Studio Litho (Seattle, Washington, USA)
Produced by Brendan O'Brien, Pearl Jam
Digitally remastered