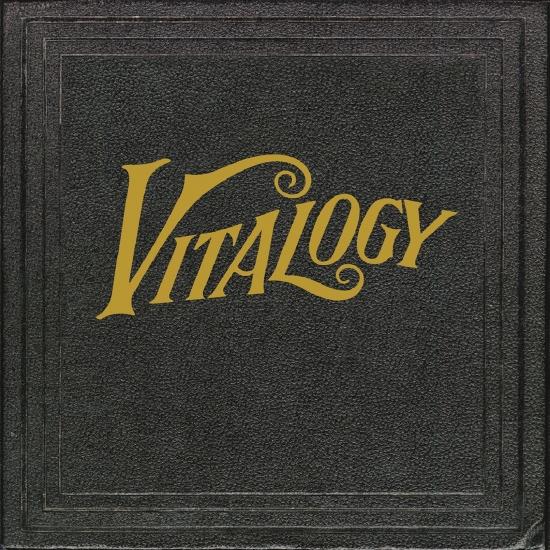 Wider in scope than any 70mm film, „Vitalogy“ is the album on which Pearl Jam demands that the pigeonholing cease and desist once and for all. Whether by throwing meatless bones at some blindly zealous fans, or by moving their sound out of the grunge-land that they once called home, Vedder & Co. present this 55-minute tour de force as a treatise to win over the alternative non-believers and drop the excess baggage of fame.
There's nothing fancy to „Vitalogy“: no ACHTUNG BABY or OUT OF TIME-like transformations, no post-modern gimmickry, no Steve Albini sound. Nevertheless, „Vitalogy“is revolutionary by Pearl Jam standards because it presents a collection of actually crafted songs, and succeeds in spotlighting the band's growing diversity.
The proof is all over the place: "Corduroy" is an honest-to-goodness pop song, disguised in Seattle garb; "Not For You" brings the band's Crazy Horse fetish to the forefront, combining a folky melody with a ripping, electric arrangement; while "Bugs," "Aye Davanita," and "Hey Foxymophandlemama" are, respectively, an accordion-driven stomp, a raga-like instrumental, and a feedback-laden sound collage. All are delivered with such taste and assurance, that rather than sounding unnatural and forced, they only further illuminate Pearl Jam's artistic strides. Each helps make „Vitalogy“ a proud notch on the band's growing musical belt.
Mike McCready, vocals, guitar, slide guitar
Eddie Vedder, vocals, guitar, accordion
Stone Gossard, vocals, guitar, Mellotron
Jeff Ament, bass, vocals
Dave Abbruzzese, drums
Additional musicians:
Jack Irons, drums
Recorded November 1993 – October 1994 in Seattle, Washington; Atlanta, Georgia; New Orleans, Louisiana
Engineered by Nick DiDie, Brendan O'Brien
Produced by Pearl Jam, Brendan O'Brien
"Spin The Black Circle" won a 1996 Grammy Award for Best Hard Rock Performance. Vitalogy was nominated for 1996 Grammys for Album Of The Year and Best Rock Album.