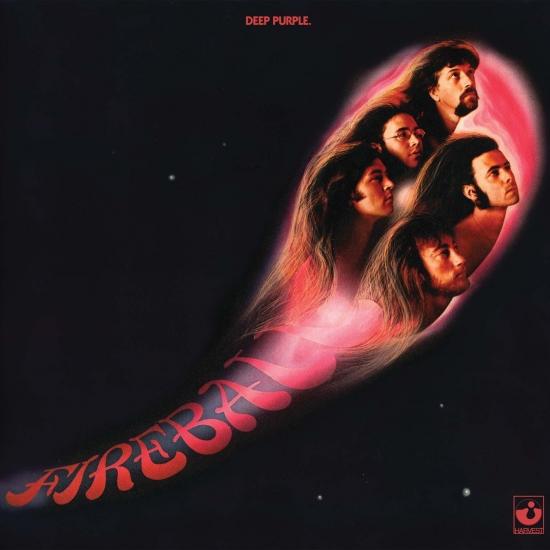 Having already gotten off to a great start with „Deep Purple In Rock“, this Purple lineup of Ian Gillan, Ritchie Blackmore, Jon Lord, Roger Glover, and Ian Paice fit together like interlocking pieces. Blessed with such unerring chemistry, Purple raised the bar for hard rock with such nuggets as the hard-driving title track and the grinding 'Fools.' Elsewhere, they show surprising range with the country-flavored 'Anyone's Daughter' (featuring some impressive finger picking by Blackmore) and the Jimi Hendrix-influenced 'No One Came' (which includes a dollop of psychedelic backwards guitar). Also included is the Purple epic 'The Mule,' a sweeping tour de force dominated by Blackmore's Middle Eastern-tinged soloing and Lord's Pink Floyd-ian keyboard runs. The song became a highlight of Deep Purple's live shows.
„One of Deep Purple's four indispensable albums (the others being In Rock, Machine Head, and Burn), 1971's Fireball saw the band broadening out from the no-holds-barred hard rock direction of the previous year's cacophonous In Rock. Metal machine noises introduced the sizzling title track -- an unusually compact but explosively tight group effort on which Jon Lord's organ truly shined. The somewhat tiring repetitions of 'No No No' actually threatened to drop the ball next, but the fantastic single 'Strange Kind of Woman' nimbly caught and set it rolling again, just in time for the innuendo-encrusted hilarity of 'Anyone's Daughter,' featuring one of singer Ian Gillan's first (and still best) humorous storylines to go with one of guitarist Ritchie Blackmore's most uncharacteristic, bluesiest performances ever. 'The Mule' opened the vinyl album's second side with what is perhaps Purple's finest instrumental, and on the hyper-extended 'Fools,' the bandmembers proved they could flirt with progressive rock without plunging off its cliff (although the song could probably have done without its drawn-out middle section). And closing the album was the exceptional 'No One Came,' where intertwining instrumental lines locked together beautifully, Gillan wove another entertaining yarn that was part autobiography and part Monty Python, and the often underrated skills of drummer Ian Paice helped the song sound so unreservedly fresh and intuitive that one could almost be convinced the band had winged it on the spot. Sure, the following year's Machine Head would provide Deep Purple with their commercial peak, but on Fireball, the formidable quintet was already firing on all cylinders.“ (Eduardo Rivadavia, AMG)
Ritchie Blackmore, guitar
Ian Gillan, vocals
Jon Lord, keyboards
Roger Glover, bass, synthesizer
Ian Paice, drums
Recorded from September 1970 to June 1971 at De Lane Lea Studios, the Olympic Studios in London, as well as The Hermitage in Welcombe, North Devon
Engineered by Martin Birch, Lou Austin, Alan O'Duffy
Digitally remastered