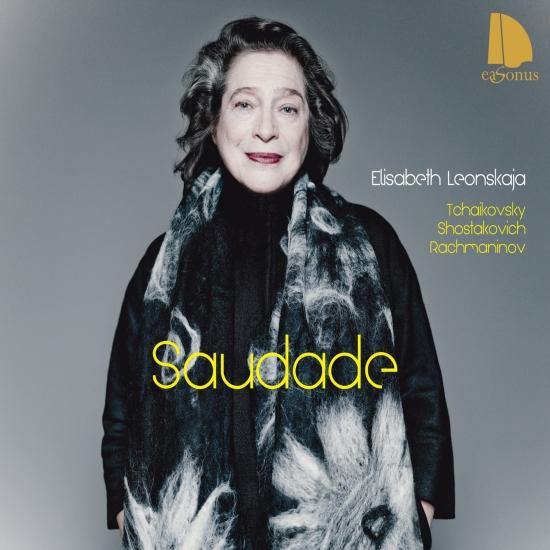 The concept lying behind pianist Elisabeth Leonskaja’s new recording entitled “Saudade” stems from no set of musicological ideas; nor does it have any programmatic basis. Instead, it derives from an emotional state or feeling. Therein lies its argument and the justification for this programme. The composers and their particular works presented here are deservedly important and carry out an especially meaningful role. Yet, it is the feeling which is important here, and it is the unifying theme of what is the most personal (so far) of the Russian pianist’s recording projects.
Why, then, saudade? For the reason that within the heart of this album resides a feeling. Feelings are enigmatic in terms of definition, can be complicated to translate and, on occasion, more than a single method is needed in order to express them. Portuguese in origin, the word saudade, is difficult to pin down exactly and is nigh on impossible to render into another language. Consequently, other languages (such as Spanish and Galician) tend to use it in its original form. Saudade expresses a fundamental emotional state, close to melancholy, spurred on by one’s distance – in time or space – from someone or something loved; it involves bridging that distance. Often it implies the suppressed awareness that that person or thing will perhaps never return.
Saudade is not merely loneliness; nor is it just yearning; nor does it reflect a sense of either sadness or joy; it is much more than melancholy. It resembles the Welsh hiraeth, the Romanian dor (this was referred to in the context of Elisabeth Leonskaja’s earlier album “Paris” in connection with George Enescu’s Piano Sonata No. 1), and the German Sehnsucht, but the main difference between saudade and other states close to nostalgia lies in how it is perceived by the people who feel it. The sentiment expressed by Leonskaja is a particular one, her own, personal, private, special and non-transferable sentiment. It is a sentiment focused on the very origins of existence and one which finishes with its openness to transcendence. It is what has been experienced and understood; it is a loved one no longer visible but who yet keeps on existing; it is embraces…; perfumes scented which the sense of smell revives only in the mind; melodies, whose intervals, having been detected and comprehended, become part of one’s musical bloodstream; landscapes sketched out at an early age; all the many lives which have been lived; joy and sadness simultaneously; everything that will return no more; all this is saudade.
Elisabeth Leonskaja, piano