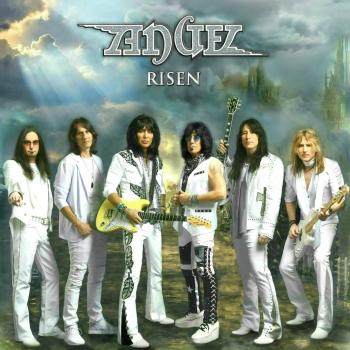 Angel
Formed in Washington, D.C., Angel are perhaps more widely recalled for their outrageous image and stage shows than for their musical prowess. Their self-titled 1975 debut, recorded for the flamboyant Casablanca Records label with a lineup comprising Frank DiMino (vocals), Edwin Lionel "Punky" Meadows (guitar, ex-BUX), Gregg Giuffria (keyboards), Mickie Jones (bass, ex-BUX), and Barry Brandt (drums), was an excellent slab of heavy pomp-rock, with lengthy songs swathed in Giuffria's atmospheric keyboards and featuring the longtime stage favorite, "Tower." Helluva Band continued in a similar vein, although the longest track, "The Fortune," was exceptional, and thus tended to obscure the rest of the material. The band's famous white satin stage clothing made its debut on the album sleeve. On Earth as It Is in Heaven saw a distinct change in musical direction, as the band adopted a pop/rock sound, and introduced a clever logo that read identically when upside down, but poor production let down the album.
White Hot, with Felix Robinson replacing Jones, was helped by Eddie Leonetti's more sympathetic production, and produced minor U.S. hits in "I Ain't Gonna Eat Out My Heart Anymore" and "The Winter Song." Leonetti subsequently produced Sinful and the in-concert set Live Without a Net, which had been recorded on the White Hot tour and suffered from the lack of material drawn from Sinful. Angel's record sales never quite reflected their popularity as a live act, and a legal dispute with PolyGram Records prompted the band's breakup in 1981. Giuffria attempted to revive the band in 1984, but the abortive reunion did lead to the formation of the more successful House of Lords. Robinson, meanwhile, appeared in an early White Lion lineup and played with 707. Brandt and DiMino re-formed Angel in the late '90s to record In the Beginning, with the help of guitarist and songwriter Richard Marcello. They staged an Angel reunion of sorts by persuading former colleagues Robinson and Meadows to play on the track "Set Me Free." (All Music Guide)