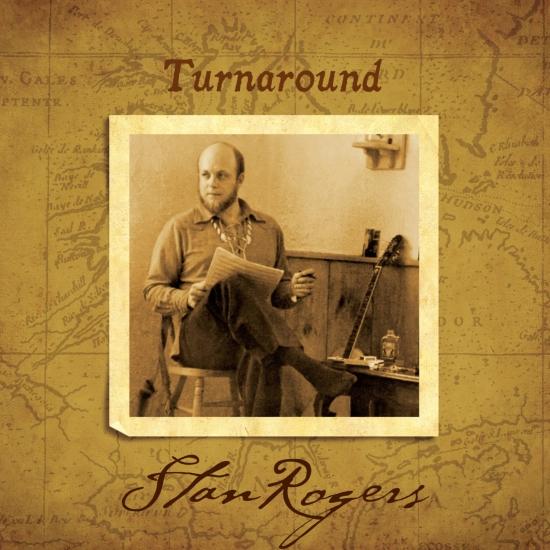 Stan Roger's second full length album. His album "Turnaround" features many of Stan's contemporary songs as well as two cover songs, "Dark Eyed Molly" by Archie Fisher and the Traditional standard "Oh No, Not I".
The thing that immediately struck me on listening to these albums is the extraordinary quality of the recordings. They could have been recorded a week ago, they are so clean and immediate. In fact my first thoughts were to look at the sleeve and think to myself, “Stan Rogers, I thought he was dead…” And of course he died in 1983 at the stupidly young age of 33 in an aeroplane fire on his way home from a folk festival. Fortunately, he had already made a name for himself and for the Canadian experience. It was equally fortunate that he had already recorded four classic albums.
The second and third of five of Rogers’ albums to be remastered, they have been carefully packaged and include his original liner notes. Contributors to the newly written notes that accompany the re-releases include Rogers' widow Ariel.
His influence continues: both of the previous two CDs I reviewed for Living Tradition include a song found on these albums. Do the CDs give any clue as to why? His rich, baritone voice? The exemplary – interesting yet uncluttered – arrangements? His ability to tell a good yarn, whether of his own or of others? Whether singing an Archie Fisher composed love ballad (Dark-Eyed Molly) or his own song about the difficulties of songwriting (Song Of The Candle) or the even tougher life of a fisherman (The Jeannie C) his singing is brutally honest and passionate.
The live set – recorded at the Groaning Board Folk Club in Toronto in April 1979 – powerfully captures the excitement of his live performances. It begins with a stirring version of The Witch Of The Westmorland and moves straight into an a cappella Barrett's Privateers, followed by the thought-provoking First Christmas, which acts as a pause for thought. But the energy, the vigour, the excitement – look no further than The Mary Ellen Carter – is palpable. And all human life is here – there is even a bit of light relief with a song for the poor office worker, The White Collar Holler, by an early guitar partner, Nigel Russell.
Mastering engineer Joao Carvalho and producer Paul Mills have done an excellent job in bring this material to HighResAudio.
"Largely folk, strongly inflected by Canada's East Coast influence, Turnaround touches on country-western and gospel styles, too. It's moving music that rises above simple labels and touches Canada's heart. All in all, this album is a timeless testament to Stan Rogers' vision and the power of his singing and songwriting craft." (Fogarty's Cove, 1978; Borealis, 2012)
Stan Rogers, vocal, guitar
Digitally remastered
Please Note: We offer this album in its native sampling rate of 48 kHz, 24-bit. The provided 96 kHz version was up-sampled and offers no audible value!

Stan Rogers
A child of Maritime stock on both sides of his family, Stan Rogers was born in Hamilton, Ont. on November 29, 1949. He grew to be a big man-six feet four-built like a fire truck, and possessed of a voice that rumbled from his toes. He could bluff and bellow yet was at heart a poet and intellect who would, often as not, sneak away from a gathering to curl up with a book. He made friends and enemies easily, gaining the former for life and often, in time, converting the latter.
He became a songwriter too, working as a rock bassist while still a teenager and later embracing the folk idiom. After a few years as a more-or-less conventional folkie songwriter, he discovered his real gift. After some persuasion by his Aunt June in Canso Nova Scotia, he began to write songs about his familial home…his roots. Those early songs found their way on to Stan’s first album, Fogarty’s Cove, and he was on his way. From that point forward, Stan’s best writing was about the Canadian experience. His songs gave a new voice to ordinary folks who worked the fisheries, mines and farms of this vast country.
Stan was a passionate Canadian partisan, and much of his short creative life was taken up with song cycles that chronicled the East, the Plains, the West and finally the Great Lakes and Ontario. It was a natural progression for a wanderer…to scan a continent and finally return to write of the wonders of home. He was always on the road pursuing his dream of establishing a national identity for Canadian songwriting. It was a dream fulfilled; through his constant soaring, dynamic performances, and brilliant songs, he was known throughout most of the English-speaking folk music world.
Stan died in a fire on Air Canada flight 797 at Cincinnati, Ohio airport on June 2nd, 1983. He was returning from a folk festival in Kerrville, Texas. Memorials and honours were numerous in the months that followed and in May, 1984 he was posthumously awarded the Diplôme d’Honneur by the Canadian Conference of the Arts.
His music continues to amaze, amuse and inspire people from all walks of life. It has appeared in several poetry anthologies, been used in films, plays and musicals, and has been referred to as “one of the touchstones of modern Canadian history.” (Emily Friedman)