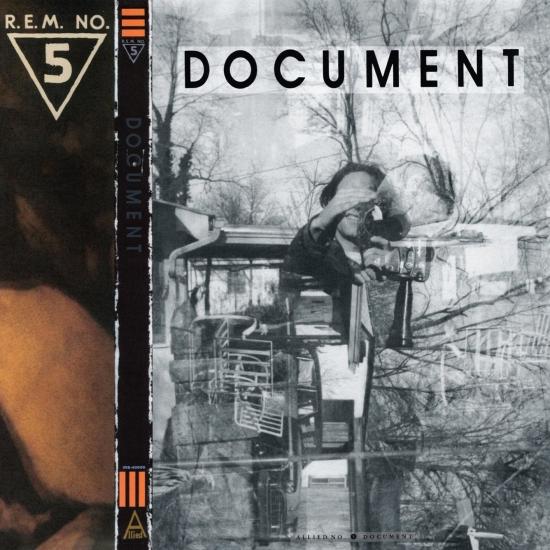 R.E.M.'s final album for IRS Records, 1987's "Document" was the Georgia quartet's commercial breakthrough. The initial single, the spookily obsessive "The One I Love," was an unexpected Top 10 hit, and its follow-up, the "Subterranean Homesick Blues"-style rant "It's the End of the World as We Know It (And I Feel Fine)," became one of R.E.M.'s most renowned songs. The first R.E.M. album produced by Scott Litt (soon to be a frequent collaborator) "Document" skillfully blends the commercial gloss of "Life's Rich Pageant" and the mysterioso murk of Fables Of The Reconstruction", combining the best elements of both for what would soon become R.E.M.'s signature sound. (Note the thumping rhythm section on the opening "Finest Worksong" and the oddly buoyant melody of "Exhuming McCarthy.") The band even manages to salute one of its favorite predecessors by romping through a loose, fun cover of Wire's "Strange."
"R.E.M. began to move toward mainstream record production on Lifes Rich Pageant, but they didn't have a commercial breakthrough until the following year's Document. Ironically, Document is a stranger, more varied album than its predecessor, but co-producer Scott Litt -- who would go on to produce every R.E.M. album in the following decade -- is a better conduit for the band than Don Gehman, giving the group a clean sound without sacrificing their enigmatic tendencies. "Finest Worksong," the stream-of-conscious rant "It's the End of the World as We Know It (And I Feel Fine)," and the surprise Top Ten single "The One I Love" all crackle with muscular rhythms and guitar riffs, but the real surprise is how political the mid-tempo jangle pop of "Welcome to the Occupation," "Disturbance at the Heron House," and "King of Birds" is. Where Lifes Rich Pageant sounded a bit like a party record, Document is a fiery statement, and its memorable melodies and riffs are made all the more indelible by its righteous anger. In other words, it's not only a commercial breakthrough, but a creative breakthrough as well, offering evidence of R.E.M.'s growing depth and maturity, and helping usher in the P.C. era in the process." (Stephen Thomas Erlewine, AMG)
Michael Stipe, vocals
Peter Buck, guitar, dulcimer on "King of Birds"
Mike Mills, bass, backing vocals
Bill Berry, drums, backing vocals
Additional musicians:
Steve Berlin, horns (on "Fireplace")
Carl Marsh, Fairlight CMI synthesizer (on "Fireplace")
Recorded March 30 – May 2, 1987 at Sound Emporium, Nashville, Tennessee
Mixed at Master Control, Los Angeles, California
Produced by Scott Litt, R.E.M.
Digitally remastered