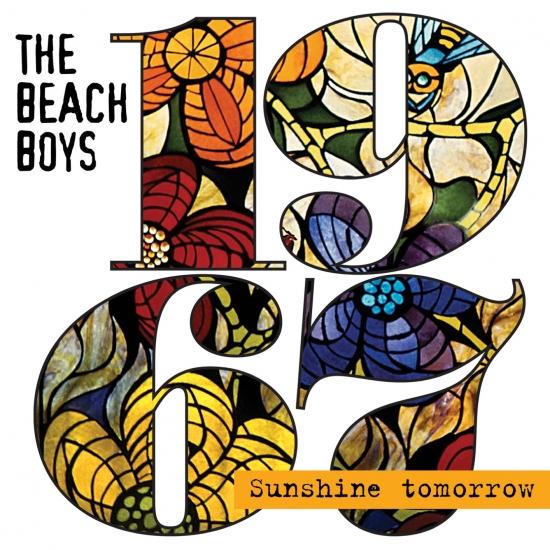 The Beach Boys have personally overseen the creative process for a new double album and collection, 1967 – Sunshine Tomorrow, to be released on June 30. 1967 – Sunshine Tomorrow features producers Mark Linett and Alan Boyd's new, first-ever stereo mix of The Beach Boys' 1967 Wild Honey album and throws open the legendary band's vault to debut 54 sought-after 1967 rarities, 50 years after they were put to tape. Previously unreleased highlights on the new collection include The Beach Boys' shelved "live" album, Lei'd in Hawaii, studio recordings from the Wild Honey and Smiley Smile album sessions, and several standout concert recordings spanning 1967 to 1970. Wild Honey's new stereo mix will also debut on a HighResAudio 50th Anniversary Edition on June 30.
1967 – Sunshine Tomorrow dives into a fascinating and frenetic chapter in The Beach Boys' long, groundbreaking creative arc, exploring the band's dynamic year in the studio and on tour. The Beach Boys' final studio session for the shelved SMiLE album took place on May 18th, 1967, with Smiley Smile album sessions booked at Brian Wilson's new home studio from June 3rd through the end of July. The band's 12th and 13th studio albums were released exactly three months apart to cap the year's studio efforts: Smiley Smile on September 18th followed by Wild Honey on December 18th.
"I wanted to have a home environment trip where we could record at my house," recalls Brian Wilson in the liner notes for 1967 – Sunshine Tomorrow. "I wanted to try something different, something new. I produced Smiley Smile, but Mike inspired me. He said 'Brian, let's make a really good, easygoing album'. We had an engineer convert my den into a studio. We had my piano detuned to make it ring more."
"Just prior to that, Brian had built up this production peak and then just completely reversed field, and (for Smiley Smile) did something so light and airy, and y' know, easy," explains Mike Love. "That was an underground album, I figure, for us. It was completely out of the mainstream of what was going on at that time, which was all hard rock, psychedelic music, and here we come with a song called 'Wind Chimes.' It just didn't have anything to do with what was going on – and that was the idea."
"Times were changing," adds Al Jardine. "We were happy to put our musical skills to work. We didn't have to look at the clock; there was virtually 24-hour availability to experiment."
On August 25th and 26th, 1967, The Beach Boys (absent Bruce Johnston, but with Brian Wilson on organ in his first concert appearances with the band in more than two years) recorded two concerts and rehearsals in Honolulu for a prospective live album to be titled Lei'd In Hawaii, applying a new Smiley Smile-inspired aesthetic to the performances. Just over two weeks later, the band (with both Brian and Bruce participating) began re-recording the live set in-studio at Brian's house and at Wally Heider Recording in Hollywood, after the Honolulu concert tapes were deemed unusable. Although completed and mixed, the final planned audio element of a canned concert audience was not added and the Lei'd In Hawaii project was canceled. Those live, in-studio performances morphed into sessions for the Wild Honey album, primarily comprised of original Brian Wilson/Mike Love compositions.
In a 1976 look back at 1967's most heralded albums, Village Voice critic Robert Christgau praised Wild Honey with an "A+" review, writing, "It's perfect and full of pleasure; it does what it sets out to do almost without a bad second."
Bruce Johnston says that Wild Honey showcases a band devoid of pressure: "Here's the thing – the most important thing – you need to know about Wild Honey. It was just an album for us to exhale and do something real simple; but as it's Brian and Mike's music, it's still fabulous and not so simple. I love the album."
Two days after wrapping the Wild Honey sessions on November 15th, 1967, Mike Love, Carl and Dennis Wilson, Al Jardine, and Bruce Johnston returned to the road for The Beach Boys' Thanksgiving Tour, premiering several songs from the forthcoming album at their concerts.
The Beach Boys
Digitally remastered