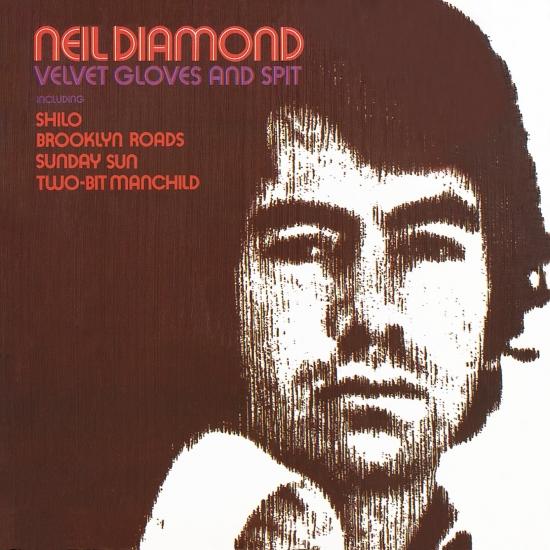 Info for Velvet Gloves And Spit

This is one of several albums Neil Diamond cut in between his early successes with Cherry Cherry and Solitary Man, and his 70s world-conquering heyday. Essentially serving as a sampler of his work, he tries several styles with variable results. His earlier recognisable approach can be found on Merry-Go- Round and the quite commercial Two-Bit Manchild, but for each of these there is an immediately forgettable slushy ballad and the hard to appreciate Pot Smoker’s Song. The subsequently-added Shilo hit is acceptable fare, but the album’s highlight is certainly the autobiographical Brooklyn Roads. As well as being a fine song, it benefits from a great arrangement and fine atmospheric playing.
„Neil Diamond's debut LP for Uni Records and his earliest extant album, Velvet Gloves and Spit has appeared in two distinctly different versions. Originally issued in October of 1968 as a ten-song LP with a photograph of Diamond in close-up on the cover, it attracted relatively little attention despite some excellent songs and one bold (if heavy-handed and misguided) effort at serious, topical songwriting. That album never sold well -- none of Diamond's albums did in those days -- and two years later, in October of 1970, it was re-released with a new cover, featuring an artist's rendition of Diamond, and an 11th song -- Diamond's version of 'Shilo,' which he'd previously recorded for Bang Records -- added to it. Apart from 'Shilo,' most of the record was cut in New York (as opposed to the smoother, more subtly soulful, elegant sounding Memphis-based recordings that would follow) and a lot of Velvet Gloves and Spit sounds closer in texture to 'Cherry Cherry' and the other sides cut by Diamond during his Brill Building phase at Bang Records through 1967, than to 'Sweet Caroline' and the other records with which Diamond closed out the '60s. There are some fine songs here, including 'Honey Dripping Time,' 'Practically Newborn,' 'Holiday Inn Blues,' and 'Sunday Sun,' and 'Two-Bit Manchild' is a fascinating adaptation of his Brill Building-era sound to a personal/introspective lyric and approach (imagine the Monkees' sound melded to a singer/songwriter persona). To appreciate this album, however, one must get past 'The Pot Smoker's Song,' a heavy-handed, anti-drug, bubblegum pop number, patterned roughly after Simon & Garfunkel's 'Old Friends/Bookends,' with trippy spoken word testimonials about the dangers of drugs (including one addict who claims to shoot heroin into his spine), punctuated by Diamond's ridiculous sing-song chorus ('Pot, pot/Gimme some pot/Forget who you are/You can be who you're not'). It's a strangely fascinating artifact and helps distinguish Velvet Gloves and Spit from Diamond's catalog of uneven albums. Also present is 'Shilo,' recorded at Chips Moman's American Studios in Memphis, which jumps ahead, presenting Diamond in his next stylistic phase with the sound that would carry him into the '70s.“ (Bruce Eder, AMG)
Produced by Tom Catalano, Chip Taylor, Neil Diamond
Digitally remastered