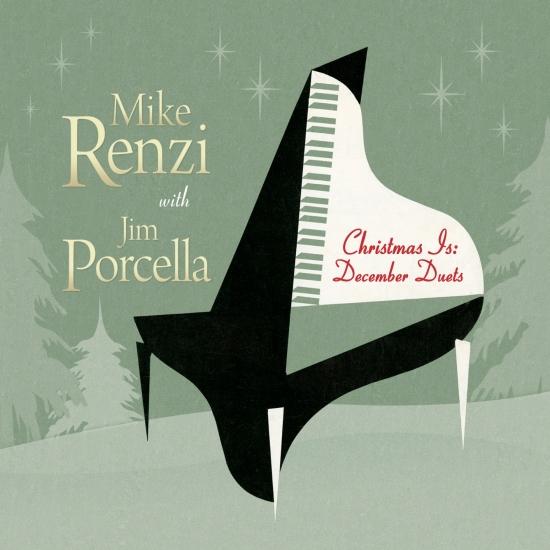 Info for Christmas Is: December Duets

Do you know Mike Renzi? Now semi-retired, the immense musical talent has won seven Emmys for musical direction, including wins for his work on “Sesame Street” and the soap opera “One Life to Live.” Also noteworthy: Mike has backed some amazing talent, including Sinatra, Tony Bennett, as well as Tony’s work with Lady Gaga at the Grammys in 2015, appearing in an Irving Berlin tribute at the New Jersey Performing Arts Center, dedicating a new Bennett-Sinatra Studio in Queens, and performing with Michael Feinstein and the Kravis Center Pops Orchestra Big Band in Palm Beach. Renzi’s newest project, Christmas Is: December Duets, is a recording for the acclaimed Whaling City Sound label. The date is a partnership with Jim Porcella, a genial-voiced baritone with serious jazz cred of his own.
Together, Renzi and Porcella have produced a sublime collection of simple, heartfelt holiday tunes, all done with delightful originality. Renzi adds the perfect decor to Porcella’s warm yuletide voice, especially on the tender “Christmas Is,” the minor key magic of “Snowfall,” and a peaceful take on Irving Berlin’s “I’ve Got My Love to Keep Me Warm.” Throughout these lovely renditions, Renzi and Porcella stroll together, soft snow falling, with one mind and one festive vision. By the time the session wraps - with an upbeat “Winter Wonderland” - it’s a foregone conclusion. The duo has woven a hypnotic holiday spell, one you’ll be happy to hear again, as the fire crackles, the tinsel sparkles, and the mulled wine flows.
Jim Porcella, vocals
Mike Renzi, piano, keyboards
Vinny Pagano, drums (tracks 4, 7)
Paul Del Nero, double bass (track 4)

Jim Porcella
grew up in Medford, MA, and started playing drums at the age of fourteen. While attending The Berklee School of Music in Boston he began performing around the New England area. He began a jazz vocal career and has recorded seven critically acclaimed CDs performed in jazz and cabaret settings in the Northeast, London, San Francisco, The Virgin Islands and Vancouver. Jim was also the featured vocalist at Boston's Ritz Carlton and Boston's prestigious Bay Tower Room. He has been the featured vocalist with the Artie Shaw Orchestra, and is the leader of the swing band Bombay Jim and the Swinging Sapphires, as well as the lead vocalist in PrimaVera!, a tribute show to the music of Louis Prima and Keely Smith.
Michael E. Renzi
(known as “Mike Renzi”, born April 28, 1946 in Providence, Rhode Island) is an American composer, music director, pianist and jazz musician. He was musical director for Peggy Lee and Mel Torme for over 25 years. He is also friends and partners with jazz singer Cynthia Crane, with whom he has published a Christmas album titled “Our First Christmas”.
Renzi also has his own jazz group called “The Mike Renzi Trio”, which published an album together with tenor sax legend Ben Webster.