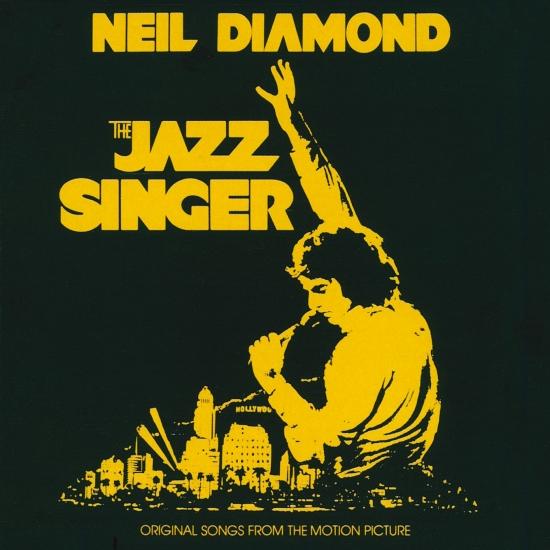 The Jazz Singer is the soundtrack to the movie of the same title. The mega-selling soundtrack to Neil Diamond's 1980 screen debut, which grossed more at the box office than Raging Bull ! includes the hits America; Love on the Rocks and Hello Again .
„Neil Diamond's 1980 screen turn as a charismatic singer torn between Jewish tradition and pop music stardom spawned this phenomenally successful soundtrack album -- six million copies and counting. Diamond's 21st century resurgence as a walking item of kitsch has sparked renewed interest in the bombastic melting-pot jam 'America,' as well as his signature late-career ballad 'Hello Again.' In addition, the lite FM favorite 'Love on the Rocks' is classic, raw-throated Neil. But beyond these notables, The Jazz Singer is an album of passable pop songs that stand on the edge of disco and in the grip of melodrama. The hyper 'You Baby' is dressed up with an audio clip marking the film's embarrassing black face sequence, while the album's midsection sags with songs that shine like Sunset Strip billboards, yet lack any real substance. Swelling strings and lovely lyrics abound, but it all seems directionless, as if Diamond's just going through the motions. Similarly, Jewish traditionals like 'Kol Nidre/My Name is Yussel' are important as thematic elements. But removed from the film and in the context of open-collared, glitzy numbers like 'Hey Louise,' their reverence is off-putting. As it's aged, The Jazz Singer has come to mark the moment when Diamond fully embraced his soft rock audience and completely turned his back on the ambition and spine-tingling vocal presence of his early career. That decision certainly proved to be an economic winner, but it ignored the fact that his most resonant performances really tear into a song with true mirth. The Jazz Singer's big hits have this quality -- a fact not lost on a new generation of listeners who revel in Diamond's powerful voice and showmanship. But the album's bulk is as wooden as Neil's acting.“ (Johnny Loftus, AMG)
Neil Diamond, guitar, vocals
Richard Bennett, guitar
Doug Rhone, guitar
Reinie Press, bass
Alan Lindgren, synthesizer, piano
Dennis St. John, drums
King Errisson, percussion
Vince Charles, percussion
Donny Gerard, background vocals
H.L. Voelker, background vocals
Linda Press, background vocals
Luther Waters, background vocals
Marilyn O'Brien, background vocals
Oren Waters, background vocals
Tom Hensley, background vocals
Recorded at Arch Angel Studios, Los Angeles; Cherokee Recording Studios; Dawnbreaker; Record Plant Mobile 3; Sunset Sound
Engineered by Andy Bloch
Produced by Bob Gaudio
Digitally remastered