At War With the Mystics (Remastered) The Flaming Lips 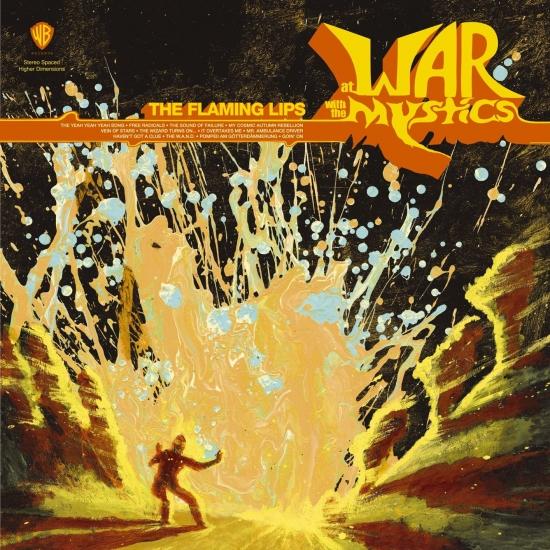 Info for At War With the Mystics (Remastered)

Cosmic, consciousness-expanding and mind-shattering, this highly anticipated follow-up to The Flaming Lips' "Yoshimi Battles The Pink Robots" brings together the expressiveness of recent albums with the heaviness, volume, and intensity of the band's earlier work. It's personal, political, psychedelic, and powerful pop.
10 years ago today, The Flaming Lips released their 11th studio album, a guitar-driven affair which earned them not only their highest chart placement to date but also a pair of Grammy Awards.
The process of recording At War with the Mystics started somewhat earlier than it might otherwise have happened, but when the 2004 Lollapalooza tour – which was to have featured the Lips playing with, among others, Morrissey and Sonic Youth – was cancelled due to low ticket sales, the band opted to head into Tarbox Road Studio with producer Dave Fridmann and start work on their full-length follow-up to 2002’s Yoshimi Battles the Pink Robots.
Between the recording sessions and the album’s release, the Lips gained additional exposure through Fearless Freaks, a documentary about the band, and released VOID (Video Overview in Deceleration), a collection of their videos since signing to Warner Brothers in 1991. They also teased the new album with “Mr. Ambulance Driver,” which made its debut on the soundtrack to Wedding Crashers in 2005.
When At War with the Mystics was released, it hit #11 on the Billboard Top 200 Albums chart, handily topping their previous high set by Yoshimi, which topped out at #50. In the UK, though, it did even better, hitting #6 and going gold, with two of the singles from the album making significant chart headway: “The W.A.N.D. (The Will Always Negates Defeat)” hit #41, and “The Yeah Yeah Yeah Song (With All Your Power)” hit #16. Strangely, neither song cracked the US Alternative chart, although “The W.A.N.D.” did at least bubble under the Hot 100.
Still, as noted, At War with the Mystics did find a certain degree of acclaim in America: the title track won the Grammy for Best Rock Instrumental Performance, and the album itself walked away with Best Engineered Album Non-Classical. Not too shabby.
Wayne Coyne, guitar, bass, vocals
Steven Drozd, guitars, keyboards, drums, vocals
Michael Ivins, bass, vocals
Kliph Scurlock, drums, percussion
Recorded June 2004 – January 2006 at Tarbox Road Studios, Cassadaga, New York
Produced by The Flaming Lips, Dave Fridmann, Scott Booker
Digitally remastered

Seeing The Unseeable: The Complete Studio Recordings Of The Flaming Lips 1986-1990 (Remastered)

Scratching The Door: The First Recordings Of The Flaming Lips (Remastered)

The Dark Side of the Moon (Remastered)

The Flaming Lips and Stardeath And White Dwarfs

Transmissions from the Satellite Heart (Remastered)

Hit to Death in the Future Head (Remastered)

At War With the Mystics (Remastered)

With A Little Help From My Fwends

The Flaming Lips are an American rock band, formed in Norman, Oklahoma in 1983.
Melodically, their sound contains lush, multi-layered, psychedelic rock arrangements, but lyrically their compositions show elements of space rock, including unusual song and album titles—such as "Psychiatric Explorations of the Fetus with Needles", "Free Radicals (A Hallucination of the Christmas Skeleton Pleading with a Suicide Bomber)" and "Yeah, I Know It's a Drag... But Wastin' Pigs Is Still Radical". They are also acclaimed for their elaborate live shows, which feature costumes, balloons, puppets, video projections, complex stage light configurations, giant hands, large amounts of confetti, and frontman Wayne Coyne's signature man-sized plastic bubble, in which he traverses the audience. In 2002, Q magazine named The Flaming Lips one of the "50 Bands to See Before You Die".
The group recorded several albums and EPs on an indie label, Restless, in the 1980s and early 1990s. After signing to Warner Brothers, they scored a hit in 1993 with "She Don't Use Jelly". Although it has been their only hit single in the U.S., the band has maintained critical respect and, to a lesser extent, commercial viability through albums such as 1999's The Soft Bulletin (which was NME magazine's Album of the Year) and 2002's Yoshimi Battles the Pink Robots. They have had more hit singles in the UK and Europe than in the U.S. In February 2007, they were nominated for a 2007 BRIT Award in the "Best International Act" category. By 2007, the group garnered three Grammy Awards, including two for Best Rock Instrumental Performance.
On October 13, 2009 the group released their latest studio album, titled Embryonic. On December 22, 2009, the Flaming Lips released a remake of the 1973 Pink Floyd album The Dark Side Of The Moon. In 2011, the band announced plans to release new songs in every month of the year, with the entire process filmed.