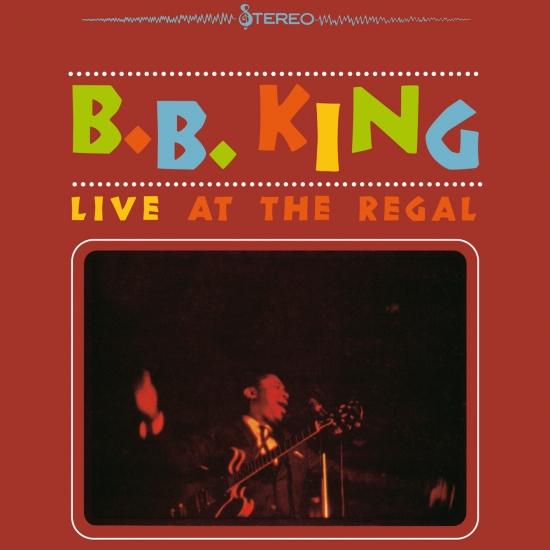 The recording of B.B.'s 1964 performance at the Regal was hailed as an instant classic upon its release, and it's still often named as the best live blues album ever. It's been remastered from the original tapes and includes both the original and updated liner notes. Songs include Please Love Me; You Upset Me Baby; Woke Up This Mornin'; Every Day I Have the Blues; It's My Own Fault , and more from the King of the Blues.
„B.B. King is not only a timeless singer and guitarist, he's also a natural-born entertainer, and on Live at the Regal the listener is treated to an exhibition of all three of his talents. Over percolating horn hits and rolling shuffles, King treats an enthusiastic audience (at some points, they shriek after he delivers each line) to a collection of some of his greatest hits. The backing band is razor-sharp, picking up the leader's cues with almost telepathic accuracy. King's voice is rarely in this fine of form, shifting effortlessly between his falsetto and his regular range, hitting the microphone hard for gritty emphasis and backing off in moments of almost intimate tenderness. Nowhere is this more evident than at the climax of 'How Blue Can You Get,' where the Chicago venue threatens to explode at King's prompting. Of course, the master's guitar is all over this record, and his playing here is among the best in his long career. Displaying a jazz sensibility, King's lines are sophisticated without losing their grit. More than anything else, Live at the Regal is a textbook example of how to set up a live performance. Talking to the crowd, setting up the tunes with a vignette, King is the consummate entertainer. Live at the Regal is an absolutely necessary acquisition for fans of B.B. King or blues music in general. A high point, perhaps even the high point, for uptown blues.“ (Daniel Gioffre, AMG)
„Most essential of the many many titles is the extraordinary 1964 set from the Regal in Chicago, 'Live at the Regal', on which King demonstrates his superior musicianship as well as his exemplary rapport with his audience. Stirring performances of 'Every Day I Have the Blues', 'Sweet Little Angel' and 'Woke Up This Mornin'' key to show, but the highlight is the hilarious 'Help the Poor.' (Rolling Stone)
B.B. King, guitar, vocals
Leo Lauchie, bass
Duke Jethro, piano
Sonny Freeman, drums
Bobby Forte, tenor saxophone
Johnny Board, tenor saxophone
Recorded November 21, 1964, Regal Theater, Chicago, Illinois
Produced by Johnny Pate
Digitally remastered
#141 on Rolling Stone Magazine's 500 Greatest Albums of All Time