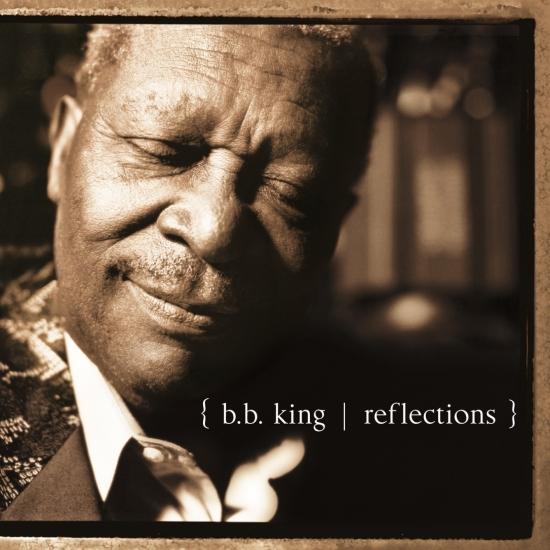 Reflections is the fortieth studio album B.B. King, released in 2003. B.B. King unleashes his inner crooner on this collection of 13 of his sentimental favorites.
Having plied his trade for well over a half century, B.B. King kicks back with 2003 outing „Reflections“ that finds him tackling a baker's dozen worth of pop, jazz, country and blues standards. Teaming up with Eric Clapton producer Simon Climie, King is also joined by a coterie of respected sidemen including jazz great Joe Sample and blues-rocker Doyle Bramhall II. Among the many influential idols this Mississippi native tips his hat to include Louis Armstrong (a stirring 'What a Wonderful World'), Nat 'King Cole (the snappy 'Exactly Like You'), and Frank Sinatra (a lush 'I'll String You Along.') Oftentimes in the quest to lend an air of sophistication to a project that leans so heavily on older and more classic material, there's always the danger of an everything-but-the-kitchen-sink approach when it comes to adding additional orchestration. Thankfully, Alan Douglas uses a light touch with his string arrangements on cuts like 'On My Word of Honor' and 'Neighborhood Affair,' a pair of songs previously recorded by King. With „Reflections“, this guitar-playing septuagenarian shows he's hasn't lost a step.
B.B. King, vocals, electric guitar
Doyle Bramhall II, guitar
Joe Sample, Wurlitzer piano, Fender Rhodes piano, acoustic piano
Tom Baker, Fender Rhodes piano
Tim Carmon, acoustic piano, Hammond B-3 organ
Nathan East, bass
Abe Laboriel Jr., drums
Recorded at Record One, Sherman Oaks, California
Digitally remastered