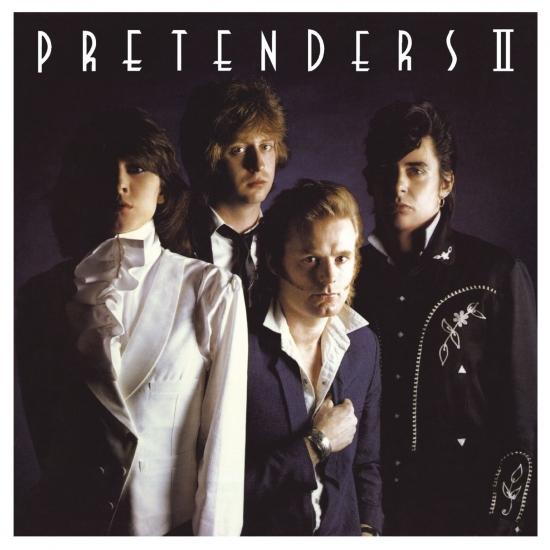 The band look magnificent on the cover as they pose with make-up or heavily retouched faces. They look confident, knowing that their follow-up is almost as good as the debut. Chrissie and Ray Davies were stepping out at this time, hence the opening track, "The Adultress," as Hynde whispers her confession over a furious wall of sound, to be immediately followed by her reminder that "Bad Boys Get Spanked." If only Chrissie, if only. The album drives and dives, pausing for "I Go To Sleep," another old Ray Davies song. There is not a bad track in sight.
„The Pretenders' debut album was such a powerful, monumental record that its sequel was bound to be a bit of a disappointment, and Pretenders II is. Essentially, this album is an unabashed sequel, offering more of the same sound, attitude, and swagger, including titles that seem like rips on their predecessors and another Ray Davies cover. This gives the record a bit too much of a pat feeling, especially since the band seems to have a lost a bit of momentum -- they don't rock as hard, Chrissie Hynde's songwriting isn't as consistent, James Honeyman-Scott isn't as inventive or clever. These all are disappointments, yet this first incarnation of the Pretenders was a tremendous band, and even if they offer diminished returns, it's still diminished returns on good material, and much of Pretenders II is quite enjoyable. Yes, it's a little slicker and more stylized than its predecessor, and, yes, there's a little bit of filler, yet any album where rockers as tough as "Message of Love" and "The Adultress" are balanced by a pop tune as lovely as "Talk of the Town" is hard to resist. And when you realize that this fantastic band only recorded two albums, you take that second album, warts and all, because the teaming of Hynde and Honeyman-Scott was one of the great pairs, and it's utterly thrilling to hear them together, even when the material isn't quite up to the high standards they set the first time around.“ (Stephen Thomas Erlewine, AMG)
Chrissie Hynde, rhythm guitar, lead vocals
Pete Farndon, bass, backing vocals
Martin Chambers, drums, backing vocals
James Honeyman-Scott, lead guitar, keyboards, backing vocals
Additional musicians:
Chris Mercer, tenor saxophone
Henry Lowther, trumpet
Jim Wilson, trumpet
Geoff Bryant, French horn
Chris Thomas, sound effects
Recorded 1980–1981 at Wessex Studios, London and Pathe Marconi Studios, Paris
Engineered by Bill Price
Produced by Chris Thomas
Digitally remastered