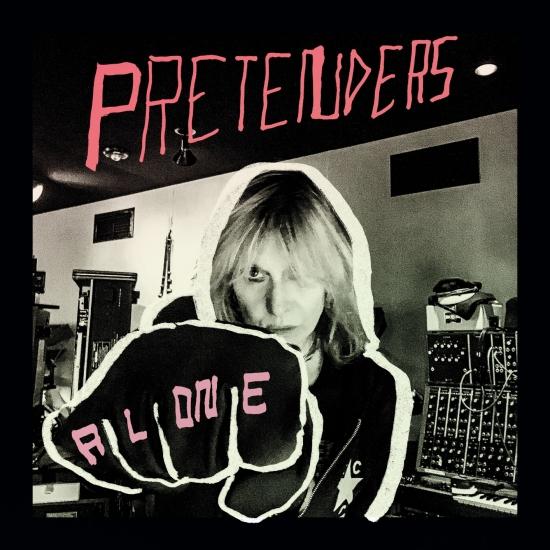 The Pretenders release their brand new album, „Alone“. It is the first Pretenders album for eight years and was recorded in Nashville. Originally intended as a solo follow-up to 2014’s ‘Stockholm’, it soon dawned that those driving guitars, ragged but righteous arrangements, tough yet tender lyrics delivered by the most beautifully distinctive voice of a generation, sounded fantastically familiar. The Pretenders were back. 36 years after their remarkable first album, ‘Alone’ could be the older, wiser, badder sister to that exhilarating debut.
Chrissie Hynde recorded the album in Nashville with Dan Auerbach, from The Black Keys, who stood as captain, producer and multi-instrumentalist on the record, an album which sees Chrissie at her searingly honest, most incisive best.
The full band joining Chrissie and Dan on the album features Johnny Cash’s former bass player Dave Roe and country rocker Kenny Vaughan on guitar plus sundry members of Dan Auerbach’s side project The Arcs: Richard Swift, drums, Leon Michels, keyboards and Russ Pahl providing sly curlicues of pedal steel. The album was mixed by Tchad Blake (Arctic Monkeys, Peter Gabriel, Elvis Costello). Duane Eddy also features on the punchy ‘Never Be Together’.
Of the new album Chrissie Hynde said the following: “This record is what I love the most - real people playing real music. I sang and recorded every vocal in a 48 hour period - 48 hours to sing them, 40 years of preparation!”.
Chrissie Hynde, vocals, guitar
Dan Auerbach, vocals, guitar
Dave Roe, bass
Kenny Vaughan, guitar
Richard Swift, drums
Leon Michels, keyboards
Russ Pahl, pedal steel