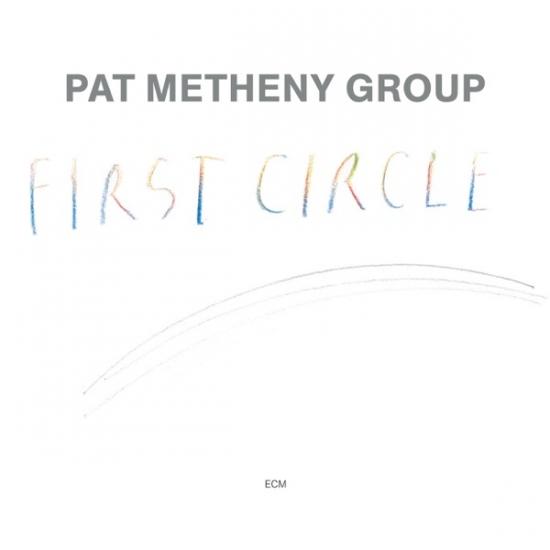 "First Circle" was Pat Metheny's last recording for ECM, before signing with Geffen Records.With new members Pedro Aznar and Paul Wertico, the group was set for its next phase. Metheny's musical touchstones are all here - South America, spirited rock, and de-tuned sonic parody.
By the release of First Circle, expectations for the Pat Metheny Group surely ran high, but with the appearance of new drummer Paul Wertico (replacing Danny Gottlieb) and Argentine percussionist Pedro Aznar (who took the place of Nana Vasconcelos, and whose vocals elevated the group to new levels) the results coalesced into something timeless. Don’t let the hokey “Forward March” fool you, however. Everything that follows is as solid as it gets. Were you to map out a flow chart of listeners’ favorites here, the largest field would likely be taken up by the effervescent title cut. And while indeed this vocalese-laden train of stunning pianism from Lyle Mays and Metheny’s equally locomotive acoustic is a glorious masterstroke if there ever was one, one can hardly refuse the wide vistas of “Yolanda, You Learn” or the heartrending brushwork of “If I Could,” one of the most utterly beautiful statements Metheny has ever recorded. “Tell It All” and “End Of The Game” hark back to Offramp, the latter especially in its soaring synth guitar lead. Both are spurred along by a gentle guiding hand, born of a palpable synergy and given traction in Wertico’s fantastic timekeeping. Although Metheny’s presence is vivid throughout, for me it is Mays who gilds this project with its distinguishing colors. And hats off to Aznar, whose singing in “Más Allá” (this album’s “What Game Shall We Play Today?”) adds another highlight. It’s fantastic to hear lyrics being added sparingly to the Metheny universe, if only because his melodic lines already describe so much without them. Aznar shines again in “Praise,” thereby ending things with a revelry more than worthy of its title. Are you really still reading this?
Pat Metheny, guitars, synclavier guitar, guitar synthesizer
Lyle Mays, trumpet, synthesizers, piano, organ, bells
Steve Rodby, double bass, e-bass, drum
Pedro Aznar, voice, guitar, percussion
Paul Wertico, drums, percussion
Recorded February 15-19, 1984 at Power Station, New York
Engineered by Jan Erik Kongshaug
Produced by Pat Metheny
Digitally remastered by Christoph Stickel