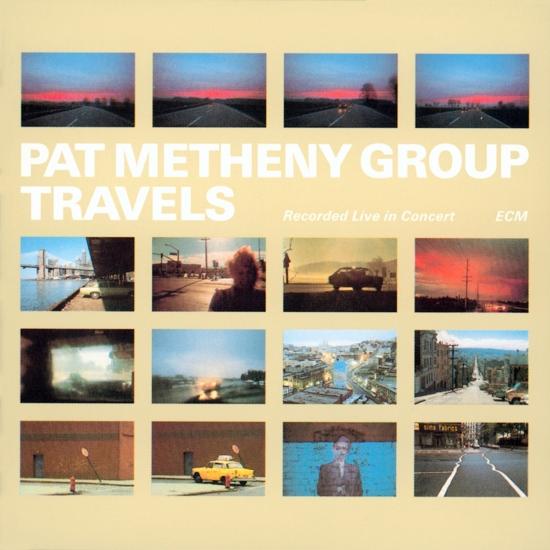 If you’ve ever desired a Pat Metheny Group greatest hits album, then Travels is for you. Compiled from the group’s touring activities in 1982, this double set is a must-have. From the glittering lotus of melody that is “San Lorenzo” to the even more effusive “Phase Dance,” the requisite classics are all here. We also get a curtailed, though no less epic, version of “As Falls Wichita, So Falls Wichita Falls,” which here draws out like a long cinematic fade and throws the windows open wide to the band’s boggling sonic purview. And one can hardly help but swoon from the dizzying heights reached by this live version of “Are You Going With Me?” Here the studio version seems but a memory on the path to glory, and finds exuberant life in what is perhaps Metheny’s best solo on record. An absolute affirmation.
Yet the album’s true value comes in the handful of songs exclusive to it. Through these we encounter softer sides of the PMG, each burnished like a different shade of leather. “The Fields, The Sky” is an outstanding place to start. Vasconcelos’s unmistakable berimbau threads a supremely melodious backdrop, while Metheny is at once distant and nearby, winding a slow and organic retrograde around the fiery center within. Vasconcelos is also the voice of “Goodbye,” a forlorn piece of sonic stationery across which Metheny inscribes a most heartbreaking letter toward a ripple of an ending. This pairs nicely with the title track, a laid-back photograph of Americana that is like a rocking chair on the back porch: lulling, and affording an unobstructed vista. Similar strains await us in “Farmer’s Trust,” a slow plunge into an ocean of undriven roads gilded by the whispering of baby birds and the rustling of the leaves that hide them, and in the smoothly paved blacktops of the synth-driven “Extradition” and “Song for Bilbao.” Each of these creeps along like wispy clouds over badlands, spun by keyboardist Lyle Mays into sunset. But it isn’t all drawl, as drummer Dan Gottlieb proves in the invigorating “Straight On Red,” throughout which he provides the perfect springboard for the masterful dialogues of Metheny and Mays.
Travels are what the PMG are all about, and the selfsame album shows us the collective at its finest hour. Those hearing the PMG for the first time will want to start with the studio sessions—and especially Offramp—from which Travels was in part drawn. That way, one can appreciate the enthusiasm of the crowds, and get at least a taste of what it must have felt like to be there among them. With a depth and cleanliness of sound that no band can match, the PMG were a force to be reckoned with, but also one so welcoming that reckoning need never have applied. Theirs is a space where nature and nurture shared the same pair of lungs.
Should posterity ever look back on our age as one of overconsumption, warmongering, and greed, one listen to Travels will prove to them that in our hearts we continued to cherish all that is good and true.
Pat Metheny, guitar, guitar synthesizer
Lyle Mays, piano, synthesizer, organ, autoharp, synclavier
Steve Rodby, acoustic bass, electric bass, bass synthesizer
Dan Gottlieb, drums
Nana Vasconcelos, percussion, voice, berimbau
Recorded July, October, and November 1982
Produced by Pat Metheny and Manfred Eicher
Digitally remastered